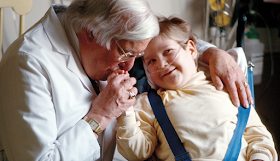 "You remind me of my wife," the pediatric neurologist told me. "She's always taking notes." We were in a conference room in the NICU a few days after Max was born, and I was furiously scribbling stuff down. Dr. Gold been called in for a consult—he was a longtime doctor at Babies Hospital of Columbia University Medical Center. Dave and I were desperate for guidance. Both the pediatric neurologist on staff, Dr. K, and the resident had told us how rare a bilateral stroke in an infant was. "I found just one case in the medical literature," the resident had said. We so needed hope.

Dave and I were in shock, freaked out and overwhelmed. We hadn't known babies could have strokes. On the day Dr. K told us what had happened to Max, he had somberly gone down the list of the many things Max was at risk for: Max might never walk or talk. Max might be cognitively impaired. Max might have vision and hearing problems. The sweet resident had given us some consolation when he spoke about the plasticity of the brain, and how it had the power to regenerate.

Sitting there talking with Dr. Gold, he acknowledged that nobody could tell us what the future held for Max—the mysteries of the brain were many. He urged us to get him as much therapy as possible, because those early years are critical for development. I'd felt the most powerless and despondent I've ever felt in my life as Max lay in the incubator in the NICU, unconscious. It was heartening to know that there was something we could do. We never did take Max back to see Dr. Gold because we found a wonderful neuro close to our home, but I will never forget his warmth and wise words that day in the NICU. Even his off-handed remark, "You remind me of my wife" was so warm and real and non-clinical, the opposite of everything we'd been dealing with.

I randomly found out the other day that Dr. Gold had died in January. I'd gotten an email that the American Academy of Nursing and 96 other organizations had delivered a letter to Congress calling for a bipartisan national committee on mass shootings. As I scanned the list of groups included, I noticed the Arnold P. Gold Foundation and visited the site. Its mission: "To create the gold standard in healthcare—compassionate, collaborative and scientifically excellent care—to support clinicians throughout their careers, so the humanistic passion that motivates them at the beginning of their education is sustained throughout their practice." That's Dr. Gold in the photo above with patient Christopher Savage in the 1990s.

I know just how much the world needs more docs like Dr. Gold—and a nonprofit like the one he founded—because of how that other neurologist in the NICU had made Dave and me feel. He was knowledgable, but he left us in despair about what the future held for our boy. And then, I encountered a doctor who proved even worse. Max was a little over three months old when I visited an experienced neonatologist who'd come recommended by a friend. This doctor examined him head to toe, noticing Max's muscle tightness. He made a comment about how the only other moms he'd ever met who'd had babies with strokes had been mothers who smoked crack. And then he said, "His future looks ominous." When I started sobbing, he looked surprised and remarked, "Nobody has told you that yet?"

No, nobody had, not even the grim pediatric neurologist. I knew, from my conversations with Dr. Gold, that this doctor could not actually predict his future. Afterward, his social worker held Max as I cried some more, got it together, and informed her that no doctor should ever use that word with any parent, because what good did it do a child if his parents had no hope for him?

Hope is what parents of a baby in trauma so desperately need. It is the medicine that revives our spirits and bolsters our determination. And while of course doctors shouldn't be falsely positive, a little hope goes a long way.

I never went back to that doctor, although I've definitely had if-he-could-see-Max-now pangs. I felt the same about Dr. K; he died several years ago.

I read the obituaries for Dr. Gold. He was only the sixth doctor to hold a license in pediatric neurology. He often asked about his young patients' lives, and made it a point to ask parents how they were doing. He'd started his foundation in 1988. He was 77 years old when he met Max, and he treated patients until he was 88 years old. It's because of his foundation that students at more than 170 medical schools and physician assistant programs now pledge the Hippocratic Oath (you know, the one where they vow "first, do no harm") early on in their education, rather than at graduation, so they have ethical expectations set for them at Day 1. One obit quoted him as saying, "You're only half a physician if you're just good at your craft. Unless it's coupled with patient-centered care and humanism, it's suboptimal care."

I wish I'd let Dr. Gold know about the good he'd done for me and Dave during that dark, dismal time in our lives. I'm grateful, too, for the good his foundation will do for future generations of doctors, along with the children and parents they'll be helping. As many of us know, the best doctors for our children are the ones who offer astute diagnostics, helpful advice and hope.