The uphill battles you fight for your child, and feeling all the feels 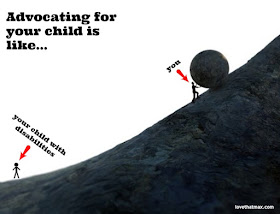 I had one of those days yesterday when having to advocate for Max weighed heavily on me. It's not that I don't have to push for stuff for Sabrina, but Max has some specific needs which lead to certain situations. In this instance, I didn't even do anything—the mere thought of having to deal with yet another issue put me off.

Max was really tired; he'd gone to a school event the night before. He trudged off to the bus at the usual time of 7:25 a.m. And I was all, I have had it with the pickup time. It's not that it's so early in the morning, it's that Max is on the bus for an hour and twenty minutes for a school that is 5.5 miles away from our house. The trip takes me 12 minutes without traffic, maybe 20 to 30 minutes during rush hour. And of course, there are other students on the bus—but anything more than an hour commute for him is ridiculous. Max used to go to a school that was double the distance away, and his ride was 25 minutes shorter.

Getting Max to sleep earlier is not an option. Most nights, he already crashes at 6:15 or 6:30—his muscles work really, really hard during the day, and he is pretty wiped out come evening.

When I raised the issue earlier in the year with the bus company and our transportation coordinator, I was told nothing could be done. Unlike me, I let it slide. And now, the situation was rearing its head.

On the positive side, the bus company—it's transported Max for years now—and the drivers are dependable. I've read horror stories over the years. He is first to get dropped off in the afternoon, which works out nicely for therapies. Still, that does not even things out. Max has cerebral palsy. Siting immobile on a bus for an extra 20 to 30 minutes a day is not ideal for his muscles, which are on the stiff side. Max is also not a boy who can whip out a book and read it during a bus ride, have extended conversation with other students or do homework independently on his iPad. (And if said iPad was in his hands instead of in his backpack, he'd end up watching fire truck videos and he does not need any more screen time, trust me on that one.)

Eager for perspective, I posted on Facebook to ask if other parents had dealt with excessively long bus trips. Then I emailed one of Max's doctors and asked him to write a letter about the situation. I also started composing one of my own for our school district (Max is bussed to an out-of-district school), all during my train commute to work. When I checked Facebook, there was an explosion of comments.

As is always the case, I got great feedback from the hivemind, and the comfort of knowing I wasn't alone. A couple of parents suggested raising this at the IEP, and having a bus trip timeframe added. I could note that even for a mainstream kid, that amount of time on the bus was excessive. I could also bring up the medical concerns, like being on a bus for an extended period of time and not having someone who could administer the emergency injection in case of seizure.

Sometimes, though, there's also discomfort in numbers, especially hearing that this happened to numerous other students with disabilities—and in even worse ways. One mom drove her child 70 miles to school each way, an hour and 15 minutes daily; otherwise, she said, it would be a 2.5-hour bus ride each way, because it would involve picking up a student who did not live nearby. One mom noted that in addition to her child spending a whopping 150 minutes on the bus daily, this kid was being pulled out of school early—which other parents promptly noted was illegal.

I spoke with Max last night. I tried not to lead him; I asked if he liked his bus ride. Unprompted, he said it was too long. And now I know what I have to do, and I have good ammo—I am certain this will be yet another uphill battle.

I will do anything humanly possible to make life right for Max. I am his protector, his defender, his advocate, his path paver, his obstacle buster, his guardian angel. I may occasionally feel emotionally weary about always having to push to make things happen, but I never run out of steam. That's not an option.

Once again, though, I'm left wondering why it has to be so hard.
Ellen Seidman at 6:40 AM