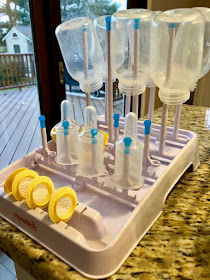 At Ben's last pediatrician checkup, when he turned 2, I confessed that we were still giving him a bottle and worried about whether we were destining him for braces. It's just one bottle at night, at bedtime. The doctor told me it was fine and to let him have a bottle for as long as he wanted one.

Now, I am assuming he did not mean until Ben left for college, but this is where things are potentially headed. Because Ben still loves his bottle, and I still love giving it to him. It is pretty much the last vestige of baby-ness left, other than his pudgy cheeks and diapers and the way he looks when he sleeps. And I am clinging to it for dear life.

When he was an infant, I'd hold his bottle for him as we sat in the rocker in his room at night. Then he started holding it on his own. And now, he holds it in his hands and zooms around and I just gaze at him, adoringly.

It's funny, I have some not-so-fond memories associated with the bottle, called the Medela Special Needs Feeder. Ben threw up constantly as a baby until we got this bottle for him, which helps reduce air intake. Keeping track of the little yellow discs has been a pain in the butt. We've accidentally thrown out several, and I regularly fish them out of the garbage disposal.

Ben is the child we waited too long to have, and then miraculously had. After him, I will never again have another baby of my own to take care of.

To be sure, I am savoring his toddler-ness. He's learning new words every day and asserting who he is; last weekend, he walked around proclaiming "I like chocolate!" If you ask him what time it is, he says "8:40!" every single time, with great conviction. His favorite activities are dance parties in Sabrina's room and gleefully hopping up on the chair next to our sink and turning the water faucet on and off. 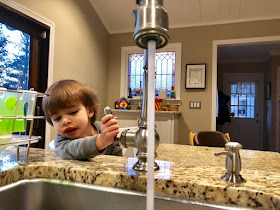 At night, I heat up hot water, pour the soy milk into a bottle, put the hot water into a cup and drop in the bottle. People say don't let your baby get used to warmed milk, but we did, and I don't mind this bit of pampering at all.

By day, Ben drinks from a toddler sippy cup. Every evening I think, Maybe tonight I should just give him a cup at bedtime instead of a bottle. And then, I heat up a bottle.
Recently, I asked Ben which he prefers. "Bottle!" he declared.

So we're in agreement about this, me and him. He's happy to keep having that bottle. And I am all too happy to keep giving it to him.
Ellen Seidman at 6:38 AM