He just wants to be alone 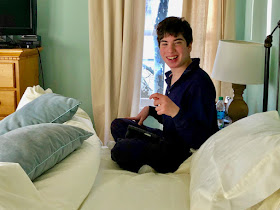 It still happens: Every so often, I have one of those "Look how far he's come!" moments. It happened this weekend.

Max likes to chill by watching videos of fire trucks on YouTube—typically, Chicago or New York. Usually, he hangs on our living room couch. But as I was playing with Ben, Max asked if it was OK for him to go upstairs and watch. This was a first.

So he grabbed his iPad and went upstairs, and I went back to building towers of blocks with Ben.

This seemingly small occurrence is something I only dreamed of when Max was a tot. Back then, we couldn't leave him alone to play, because he needed help grasping stuff and he also didn't have it in him to entertain himself. Being the mom of a little kid can be pretty nonstop, but being the mom of a little who wasn't progressing to playing on his own felt consuming. It wasn't just the endless amount of floor time—it was the undercurrent of anxiety that ran through it all. Would he ever progress to the point where he could play on his own?

Yes, he would, at around age six. I could leave him and Sabrina together, and they would occupy themselves. Slowly but surely, he also got into imaginative play—that, too, came in on Max's timeframe. Once, I walked in to see him playing doctor and checking out Sabrina's heart. 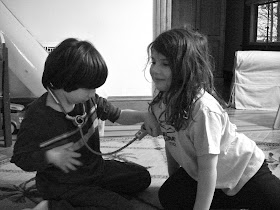 About an hour later, I went upstairs to see what was going on. Max wasn't in his room—he was sitting, cross-legged, on our bed. A teenager hiding away from the world and chillaxing, just like I'd done at his age.

Maybe these wow moments will never stop. That would be a great thing, because it would mean that Max will continue to progress throughout his life. I have a feeling that will be true.
Ellen Seidman at 6:40 AM