When parenting fails, call in backup 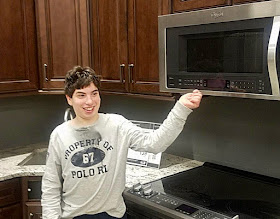 Max is still planning to move to Jamaica, a situation I somewhat consider a fail on our part. I've tried my best to reason with him—he loves his school here, Daddy and Mommy have jobs, it costs money to move and get a house. He has answers: There is school in Jamaica; Daddy can work from Jamaica, I can stick it out here with Ben and Sabrina. He dodges the issue of paying for it.

Dave, aka Marshmallow Daddy, has been indulging him. Which explains why our calendar says, on Tuesday March 20, "Fireman Max moves!" (Max is kindly waiting to go until after his sister's bat mitzvah in mid-March). This also explains Dave and Max's weekend trips to Home Depot, where Max has been picking out appliances for his new home. So far he's chosen a fridge ("Samsung!" he repeatedly tells me—he loves the new smart model that enables you to order groceries), a microwave, a range, a washer/dryer and a granite countertop. He's also discovered he can browse homedepot.com for such items.

When he's getting dressed, he'll note whether or not the clothing will be coming with him to Jamaica. He tells me he's already informed his teachers. He's got this whole thing planned out, in his mind, anyway.

"It's disgusting here!" Max says pretty much every time he comes in from outside. I don't disagree, except he's been saying the same thing about our house, too.

I think having fantasies are healthy and good; life would be pretty dreary if we had nothing to dream about. But I am pretty sure Max thinks this is real, and that's what concerns me. So this weekend, I roped in backup: his longtime, super-matter-of-fact-practical-pants speech therapist.

Things didn't start off so well.

"It's disgusting here!" Max announced as she walked into our house on Saturday and took off her boots.

She wasn't sure what he'd, said so I translated.

"Max, I can't hear that 'd'—try that again, dis-gus-ting," she said, modeling the correct tongue movement. They practiced that again and again. Super.

Toward the end of their session, I told her about Max's anticipated move.

"I just don't think it can happen," I said, and Max shook his head vehemently.

"I do!" Max announced, triumphantly, and we opened photo on his iPad of the dream house that he'd chosen.

And Max stopped and thought and had nothing to say.

Last night, I got home as the music therapist was finishing up Max's session. Max has been trying to get her to compose songs about his new home, Jamaica, and I'd told her we were trying to be realistic.

"I had Max write a song about what he loves here," she told me.

"And he did it?!" I asked, incredulously.

"Well, it was mostly me," she said. But Max wasn't having it: even when she mentioned his favorite fire station he said, "Oh, it's OK."

Some good has come of this fixation: Max is learning to make a case for what he wants.

"You and Daddy moved to this house," he recently pointed out when I was telling him he couldn't move.

"First home!" he continued. I knew what he meant: This was our first home. He, too, deserved to have a first home.

I have a chat coming up this week with his teachers, and I'll be asking them what he's said to them. While I do think he needs to keep it real and we have to help with that (the Home Depot jaunts have got to stop), this is far from the worst problem in the world. Maybe Max will calm down once the weather turns warm. Meanwhile, I'm trying to plan a spring getaway; Max insists he doesn't need to go because he's moving.
Ellen Seidman at 6:38 AM