That dream about your child where he's standing up for himself 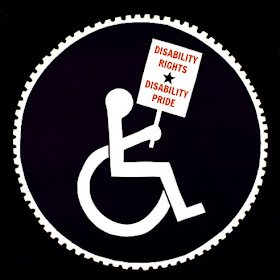 My dream of independence for Max contains many dreams—that someday, he'll dress himself, prepare meals for himself, make plans for himself, get himself places. The list goes on. Whatever level of independence he achieves, I'll be grateful for, I know. Yet as Max has gotten older, I've had a new independence dream for him: one about him owning his disability and standing up for his rights as a person with disabilities (PWD).

Yesterday, Time posted an excellent article by Abigail Abrams on the momentum the disability rights movement has been gaining, in part sparked by attempts to repeal the Affordable Care Act; it included cuts to Medicaid, the main health insurer for children and adults with disabilities. Disability activism has certainly been around, but there's new urgency. As longtime disability activist Anita Cameron said, "It's far more intense. We really feel our lives are at stake."

People in the disability community around the country staged protests in the face of the potential repeal of the ACA. Some 45,000 people with disability attended the Women's March on Washington last year—making it, the article notes, the largest gathering of disabled people in U.S. history. Since 2016, the #CripTheVote campaign started by activists Andrew Pulrang, Alice Wong and Gregg Beratan has encouraged PWD to get politically involved. The larger chapters of the disability-rights organization ADAPT have seen surges in membership.

I have no idea how Max might someday pave the way for himself or, as the case may be, other people with disabilities. I do know that he's good at making his needs and opinions known (insert parental eye roll here), traits that are key for advocacy. Should a program refuse to let Max join, say, I'd like for him to take them to task. While part of me would like to forever shield my boy from the stigma, prejudice and exclusion that exists, I realize that I won't always be here to fight for him—and that learning to recognize when he's been wronged and fight for himself will be a tremendous asset.

Becoming a self-advocate role means taking pride in who you are, another focus for the disability community. They'd like people to see their disabilities as key to their identities as race, ethnicity and sexual orientation are. While I'm not exactly sure how to raise an advocate, I do my best to boost Max's confidence and self-worth, same as with my other children. I praise his abilities. When he gets frustrated by his challenges, I acknowledge how he feels, applaud his work-arounds, make suggestions and figure out adaptive solutions. We have ongoing discussion about what it means to have cerebral palsy. I talk about his dreams for the future, and how he might be able to achieve them. I hope to connect him with adults with disabilities he can hang with, so they can serve as role models.

When Max was little, I was laser-focused on getting him to do stuff—take a step, pick up a ball, grasp a spoon, say a sound. The truth is, there will always be everyday things that my boy won't be able to easily do or do at all, because his muscles won't bend to his will. That's why there's one development that's just as important to coax along as the physical kind: the progression of his disability pride.
Ellen Seidman at 6:40 AM