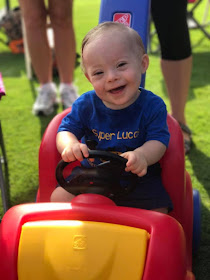 Lucas Warren, 18 months old, made history this month when he became the first tot with disabilities to be chosen as the Gerber Baby. Since the company was founded in 1928, parents have been sending in photos of their cutie-pies. Eight years ago, Gerber began an official photo contest for a "Spokesbaby." Lucas's mom, Cortney, posted this photo of him in a bow-tie on Instagram with the contest tag; Lucas proceeded to beat out some 140,000 other tots for the honor. 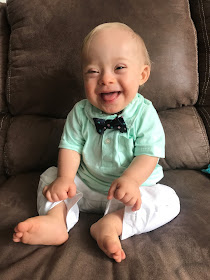 Like previous winners, Lucas will appear across Gerber's social media channels in the coming year. He's also won $50,000, and hopefully won't blow it all on apple juice and toy cars. Here's what the choice of Lucas as the new face of Gerber says about how people view children with special needs:

Even ten years ago, a Gerber baby with Down syndrome might not have happened. But more people understand that children with Down syndrome and disabilities are children first, with a smile as winning as any. Gerber's choice will help further spread that message. "The world is changing," one young woman I know commented on Facebook. Yes, it is.

2. And there's a new meaning of diversity

For decades now, companies have understood that it's important to have children and adults of different races serving as the faces of their company and, more recently, people with a variety of gender identities. In recent history, Target, Nordstrom's and other big stores have included children with Down syndrome in their ads. And now Gerber has also acknowledged, in a supremely public way, that diversity includes children with disability; hopefully more companies will follow their lead. Our daughters and sons with Down syndrome, cerebral palsy, autism and other disabilities deserve to be represented in ads, on TV, everywhere—same as their peers.

Maybe someday, a baby with Down syndrome winning a cute baby contest will not make worldwide headlines. That'll actually be a good thing because no big fuss would mean it would be no big deal—as in, it would be an ordinary occurrence for tots with disabilities to be as included and celebrated as their peers without DS. Right now, though, the fact that Lucas has Down syndrome and won the contest has appeared in almost every single headline. Because yes, this is a Very Big Deal.

4. Parents of kids with Down syndrome are feeling validated

Beth Ann (beppa_1), mom to a boy with DS, summed it up best in an Instagram comment: "Mommas all over the world are crying happy tears because you have seen what we do."

5. Perfect children come in many flavors

Since forever, the baby on Gerber food jars has been one cherubic-cheeked, cowlicked-haired tot—an iconic cuteness. Their logo likely isn't changing, but little Lucas is showing the masses another kind of perfectly adorable face. Most commenters on social media gushed about how handsome and cute he is—a new icon to adore. 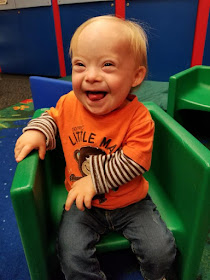