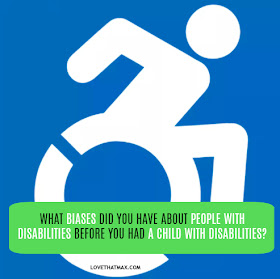 A father and son are driving down a highway. Suddenly, they get into a horrible collision and the father is killed. The son is rushed to the hospital. The surgeon looks down at the boy on the table and says, "I can't operate, this is my son!" How is that possible?

If you've heard this one before, you may know the answer. It came up in a discussion the other day at our temple about bias and prejudice in the United States. People with disabilities (PWD) were not a focus of the discussion, but as we sat there talking about Charlottesville and the time when swastikas were found in a local school's bathroom, I found myself thinking about Max, and the biases I had about PWD before I had him.

The only person I knew with disabilities growing up was a boy who'd visit the summer resort our family went to every year. He had intellectual disability, and kids used to chant the r-word at him. I remember thinking that he seemed so different from the rest of us. Other than him, my only other exposure to PWD was in public places, like the park or the mall. My parents never brought up people with disabilities. I only ever felt sorry for those in wheelchairs or who had Down syndrome. As I got older, I felt badly for the parents. It seemed tragic to have a child with disabilities.

Then I had a child with disabilities. And suddenly, we were the parents and child getting pity-filled stares. And I had to wrestle with my own biases about disability, and the reality of having a child with multiple ones.

I know that you can have a disability and have a good, happy, satisfying life.

I know that having a disability is only one part of who a person is, not the whole.

I know that you can have a disability and plenty of abilities, like any other variety of human being.

I know that some of the biggest limitations people with disability come up against are society's attitudes toward them. Over the years, Max has been turned away from children's programs and camps by those who felt they were not equipped to handle a child with cerebral palsy. Our congregation back then did not have programming for kids with disabilities and worse, they weren't particularly amenable to instituting it. All of this has been frustrating, maddening and painful at times.

I know that having a disability means that you do not sit around feeling sorry for yourself, even if others feel sorry for you.

As to that riddle about the boy on the operating table, here's the standard answer: The surgeon who said "I can't operate, this is my son!" was his mother. When people can't figure out the answer, it's because of inherent biases we have about surgeons being male.

But that day, in our discussion group, the leader had another answer: The surgeon was his other father. And with that, most of us in the room were thinking of our biases about parents.

At times, I am acutely aware of that person I used to be who did not know anything about people with disabilities, let alone PWD. I can't change that, but I can air the biases I once had in the hopes of opening discussions and spreading the good word about about my boy Max and others with disabilities.

Whether on social media or in real life, we can all encourage awareness, acceptance and inclusion, along with a better understanding of what it means to have autism, Down syndrome, cerebral palsy and all the disabilities. Person by person, we can battle biases and change perceptions about people with disability—just as our amazing children do.
Ellen Seidman at 6:38 AM