Standoffs with your child: When you won't back down 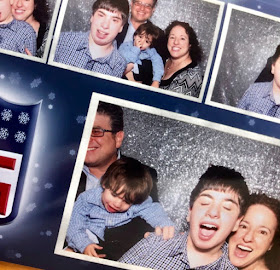 We were at the bar mitzvah of a friend's son this weekend, attending as a family. Max had sat through a good part of the ceremony. He enjoyed the cocktail hour, downing sushi and mac 'n cheese (not together). And then, a couple of hours into the party, he decided it was time to go. To emphasize this, he started roaring.

The music was pumping and we were seated in a corner toward the back so it wasn't easy for most people to hear him, but we sure could.

Dave offered to hang with him in the hallway. ROAR.

I explained that we couldn't leave, we were there as guests and it would be rude. ROAR.

I noted that me and Dave really wanted to stay, and that the boy's father was a good friend of Dave's. ROAR.

Dave offered to get Max another glass of milk (he's on a milk kick). ROAR.

"Maybe we should leave," Dave said to me.

I figured that Max would calm down at some point. I tried talking to him some more. ROAR.

I don't usually blatantly ignore Max's wishes, but it was one of those times when it didn't seem fair to let one person in our family ruin it for everyone else. We'd been discussing attending the bar mitzvah for weeks, and Max had expressed some hesitation but ultimately agreed to go. I wanted him to understand that afternoon that he needed to think about other people—the boy whose bar mitzvah it was, his family and our family. Over the years, we have often left: the party, the museum, the event, the whatever when Max decided that he'd had enough. But that was when Max had major sensory issues. He handles loud music and parties just fine now...when he chooses to.

It was awful to see Max upset, and distressing to hear him yell. But if we'd given in, if we keep giving in, Max will never learn. It's a point comedian Zach Anner brought up when he was recently interviewed about his tips for raising children with disabilities. As he said, "Raise your kids to be considerate, thoughtful adults who aren't always the center of attention. When you have a disability, the world just sort of revolves around you, and getting used to that is dangerous. It breeds codependency, and sometimes, like a weird type of narcissism." Dave and I watched the video together, nodding the whole time. Yes. This.

Eventually, when Max realized we were staying put, he stopped roaring. He ate some food. He danced a bit. He gave a high-five to the bar mitzvah boy. We took family photos in the picture booth. He informed the people at our table that he was moving to Jamaica. (Yes, still his intent.)

Then Max got antsy about leaving again. We were all on the dance floor. I looked around at the other kids and families, and suddenly felt very alone in the crowd. I used to feel that way a lot when Max was little and we were at birthday parties or at the park, and I rarely do anymore. But that afternoon was hard.

A few minutes later, shortly before the party ended, we headed out. En route home, we talked with Max about his behavior. He was quiet, but we knew he understood.

The next day, he asked when we were next going to a bar mitzvah. It's actually Sabrina's, in March.

Max had one thing to say: He wanted to know if there would be mac 'n cheese.
Ellen Seidman at 6:41 AM