Do your own fun thing: special needs parent lesson number 53,807 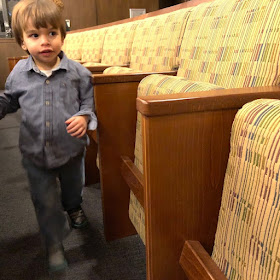 I dashed home from work recently to take Ben to a preschool party at our temple. Sabrina was at a basketball game, Dave had to work late, Max was hanging home with a sitter and it was just us two. The plan: Ben would sing songs with the other tots, then we'd all down treats.

I grabbed Ben and headed over. There were tons of kids there. Then the singing started; the twos class was slated to go last.

For the next twenty minutes, Ben zoomed up and down the rows of chairs. He refused to go on the podium and sing with the other kids from his class; instead, he ran around some more. Then it was time to eat. Then I needed a nap.

But, nope: donuts. I let him try one and he liked it. Score! (Oh, what an outstanding mom I am.) He proceeded to spend the rest of the party pressing the water cooler tap, grudgingly letting other people take their turns. I was too tired to tussle with him about it. (See: "outstanding mom.")

"You need to get one of those at home!" a dad said, laughing.

"That would be my worst nightmare," I replied. 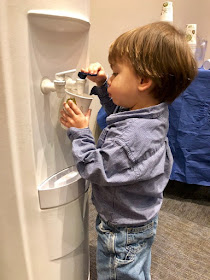 As I carried Ben to the car, he screeched "Water! Water!" because he'd left his new BFF the water cooler behind. Despite the commotion, I felt at peace. Sure, I'd missed out on seeing Ben sing with his friends. But among the many things raising Max has taught me is to let go of how activities with your child are "supposed" to be.

For years, Max didn't enjoy parties, children's events or restaurants. Dave and I struggled a lot with this. And then, we just went with it. We found one local eatery where he was comfortable, a greasy spoon with "wieners" in its name. Max only wanted to sit in the booth in the back, by the bathroom; we joked they should be a plaque there with his name on it. For the longest time, we were that restaurant's most faithful Sunday night customers. We stopped pressuring Max to go to parties, and instead we'd conquer and divide—either Dave or I would go with Sabrina, and then one of us would do something else with Max. We kept attempting to take him to new places, but if all he wanted to do at the children's museum was sit in the gigantic bus, train or fire truck, we were fine with that.

It took a long time for us to accept that we had to go with the flow. Once we did, I can't say that life was easy—when Max had public meltdowns, it was tough for us all—but at least our spirits weren't continuously crushed. Having overly high expectations of how your child will behave at, participate in or enjoy an activity is a recipe for double disaster. Because if he's not into it, and gets riled up, you're dealing with a distressed child along with your own disappointment.

There are all sorts of ways for our children to enjoy themselves; who cares if it's typical or not. At the party that night, Ben had his own kind of fun, and I got to chat with other parents here and there. Also: donuts!

Maybe next time he'll join in the singing. Maybe he won't.