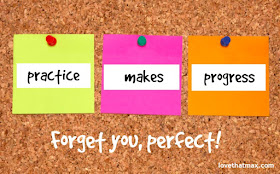 Max kept telling me something last night at bedtime, but I wasn't quite getting what he was saying—it was about going somewhere on Friday with Daddy. So I grabbed my phone and he typed it out: Home Depot.

Ah. He's mentioned going to HD o get moving boxes, because there's snow in this week's forecast and it has strengthened his resolve to move to Jamaica (just when I thought he was calming down about that).

For a couple of minutes, we practiced saying "home" and "depot." The words got a bit clearer, and we were both pleased. Progress! After years of working with Max on his speech, I know that every little bit counts. Tomorrow, his 'h' and 'd' might be hard to understand once again, but I'll take those bursts of clarity.

I heard an excellent relevant point the other day on a Dream Big episode: Practice does not make perfect, it makes progress. The precocious podcaster, 8-year-old Eva Karpman, noted that she'll never be perfect—but she wants to reach for her highest potential. (Eva's mom, Olga, joins the podcasts when she interviews guests). Yes, I thought: THIS.

Early on in Max's life, I despaired that he wasn't going to be the "perfect" child I'd imagined I'd have. As any parent of a child with disabilities knows, aching for your child to catch up with other children and ace milestones is a recipe for self-torture. As I've often said here, our children are on their own timelines, and nobody else's—but that's very hard to accept when you're a new special needs parent.

It's also hard to accept that every step forward is a step forward, a win in and of itself—and that there doesn't necessarily need to be a finish line, let alone a deadline. When Max was a little guy, I ached for him to talk. In my mind, that meant speech as a I knew it: verbal communication with clear-cut enunciation. Even as Max never babbled and struggled to say an "m" or an "oooh" as a tot, I still hoped for full-blown speech.

Although I was heartened by the gains—when he learned to say "no," when he started calling me "Ohmmy," the first time he said "I love you"—it was hard to fully savor the little advances when I always had the big win in mind. It's what we're taught as kids: Keep your eye on the prize. Never give up. Go for it. You can do it.

The truth is, it's a different story when you have a child with special needs. Try as he might, sounds and words can escape him. And try as you might as a parent, this is not in your control.

The passage of time was my teacher. Max, too. It became clear that he would have his own means of communicating, a package that consists of an iPad speech app, occasionally typing out words on other devices, gestures and spoken words. Not "perfect" by society's definition—but perfect for him. I no longer hope he'll talk like I do. He talks like Max. He makes his wants and needs and wishes fully known. The speech therapist will continue to encourage him to enunciate consonants and multi-syllable words. Dave and I will keep practicing with him. He will keep right on evolving. Perfect.

I realize this is all said in hindsight, and that when your child is very young it's hard to dull the yearning for him to do stuff and the pain you feel about the delays. Of course you want your child to achieve. But try your best to relish what a child can do, and not mourn what he can't. Savor those inchstones. The point of progress isn't perfection—it's achieving a personal best, whatever that means for your child...and you.
Ellen Seidman at 6:42 AM