The big blue swing in the park 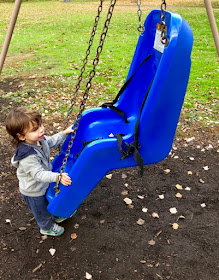 The other day, Ben and I were in a park and headed over to the swings. A mom was there with her son. Ben had no interest in getting into the swing, he just wanted to push it back and forth.

"How old is he?" I asked. He was Ben's age, and her first child. We chatted as I tried to keep an eye on Ben and make sure the swing didn't conk him in the head.

A couple of minutes later, Ben trotted over to the adaptive swing and started pushing it.

"That swing looks scary to me," the mom said.

"It's a swing for children with disabilities," I explained. "They may not be able to sit on those backless swings because they need support, and this kind puts them in a comfortable position."

And that was that. We started talking about how dirty the boys had gotten from all the mud, and I didn't bring up that I had an older son with disabilities. Then Ben zoomed over to the jungle gym because he doesn't like to stay in one place for longer than 1.5 minutes.

So many thoughts flooded my head as I watched Ben scramble around.

I am so grateful for their existence. When I was a kid, there were no swings like that in parks. Even when Max was a little guy, they weren't in parks near us so we got him one in our backyard. Now, more cities are making parks accessible, which is long overdue.

Before I had children, I never envisioned myself living in the world of big blue swings. You automatically become a citizen when you have a child with disabilities, but you might very well morph into an ambassador, eager to help people understand the need for including people of all abilities.

Standing in the park that day, it felt good to give the other mom that explanation. There is one more person out there who knows about big blue swings, and maybe that doesn't seem like much but to this mom, it is.
Ellen Seidman at 6:38 AM