Crowdsourcing: How do you deal when your child digs in his heels? 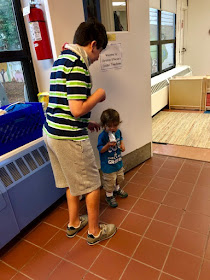 We had just escorted Ben to his Toddler Time class. Max had the day off for Columbus Day, and he'd been really excited to take Ben to school. Evidently, though, he'd hatched some plan about joining him.

"Max, you can't stay with Ben, this is a class for little kids," I explained.

The teacher looked at us.

"He can stay for a few minutes," she offered.

Tots were just beginning to trickle in. The class has only recently gotten to a point where none of the kids were crying for their parents, and I didn't want Max to disrupt the calm. Because when one kid starts to wail, they all start to wail.

A couple of the kids were staring. Ben was playing with the play kitchen.

And then I literally dragged him out of the class.

Max too old for me to be forcibly removing him from a room, but I did not want to risk a meltdown in Toddler Time. We discussed it in the car ride home.

"Max, you know your behavior wasn't OK before," I said. "You couldn't stay in the class. It's just for little kids, not big brothers and sisters."

I asked for an apology for the yelling.

He looked at me with a wicked grin and cracked up.

I couldn't help it: I had to laugh, too. I knew he knew he was acting out.

"Max, are you really sorry?" I asked.

I still have (obviously) not found a solution for defusing situations like this. When Max gets something in his head, it is difficult to redirect him. It goes beyond stubbornness—it's part of how his brain works. He hatches plans, then assumes that things will go the way he's conjured them up. Threatening to take something away from him or giving him other consequences never does the trick.

At home, distraction tends to work. Yesterday afternoon, when he refused to take his eyes off his iPad for the start of music therapy, I asked if he wanted to create a birthday song for Ben, and he perked up. But when we're out, it's harder to deal when he digs his heels in.

Open to suggestion here, people!
Ellen Seidman at 6:40 AM