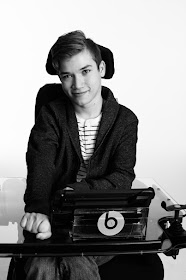 I've known about Thomas Ellenson ever since I opened the New York Times Magazine's September 12, 2004 issue and read the The Lessons of Classroom 506 about him, his father, Richard, and the inclusionary classroom Richard had made possible. Like Max, Thomas has cerebral palsy. It gave me so much hope for Max that I saved that magazine, and still have it. I connected with the family when I wrote a piece about them for Child magazine—Richard went on to create a breakthrough augmentative communication device—and we've stayed friends (he's now running the Cerebral Palsy Foundation).

Thomas Ellenson's resume is also pretty impressive. He's appeared in several Off-Off Broadway productions, a network TV episode and numerous news segments. And now, he's written a one-man show, It Is What It Is, that he also performs; it won the ONE Festival last spring. I'm seeing it this Thursday, debut night in New York City (tickets are available here), and it promises to be great. Thomas, 20, has an excellent sense of humor. When I asked him to describe himself, he responded, "People say I’m a very talented actor, but a complete geek." Below, his a's to my q's.

Did anything in particular motivate you to write It Is What It Is?

Yes. When I saw 700 Sundays by Billy Crystal, I thought, wow, it is so brilliant and I love the way he tells people about himself in a way they can relate to. I can do this!

What's the significance of the title?

Well, we are born with CP. we can’t change it. To tell you the truth, it’s not great. There are a lot of challenges. But we just have to deal with it.

What are some of your favorite parts of the show?

I especially love the end, because after I won the One Show Festival I worked with my friend, the actor and director Christopher Hanke, to rewrite it so it would be stronger and deeper. I wanted to challenge myself to bring even more to my story. Also I love the projections—photos and videos that accompany the show—because they bring so much energy to it, both amplifying my feelings and adding humor. They are designed by my friend, Zach Lobel, who is studying theater at Wesleyan. I also have a good time kind of making fun of some of my friends.

What do you most hope people will take away from the show?

I hope that people can learn that we are more than our disability. It might be the first thing someone notices, but it is not the first thing that defines me.  I’m 20 and people still treat me all the time like a stupid guy. It’s infuriating. But when I’m on stage, people are looking at me for the right reasons. And they are going to hear about all the things that are important to me. I hope that people take away all the much more important things there are about people, all the other things that really define them.

One description of the show says it "shares the experiences of a young man who wants to let people know that disabilities can actually be interesting and funny." As the mother of a son with CP, I've seen that unfortunately a lot of people consider disabilities sad, not bemusing. They just don't get it.

We need to make fun of things. Let’s face it: Disability is hard. And I realize that part of it is sad. But if that’s what you focus on, you’re not going to have a great life. And if that’s what other people focus on, you’re not going to have great relationships. For example, my friend, Zach Anner is a very funny guy. He always makes fun of himself on his YouTube channel. We both know that laughing is the key to life.

In my show, I cover a lot of things with humor. The way people look at me. Talking with a speech device. The way people are uncomfortable. I mean, so many people stop me on the street and pray for me. If that worked, how come I still have CP?!?! Instead, why don’t they stop me and ask what type of movie I like – and if we like the same one, maybe we can go together.

Have you had an interaction with someone where you helped change their perception of cerebral palsy?

My best friends. I met them at my theater group five years ago. They were so scared of me. They didn’t know anything about CP or any disabilities. And then we started working on a scene together. And they quickly got to know me. Now we get drunk and hang out. It’s like with anyone – when you share interests and take time, you build relationships. People with disabilities just so rarely get a chance to do that. Like in school, they are so worried that I get the time to finish tests in things like algebra, that I’ll probably never need again. But no one has ever worried that I have the time to hang with friends.

What key advice do you have for parents raising children with CP?

Just let them have a normal life. Ask your kids what makes them happy—and then find ways to make sure they can try to get it.

Which actor would play you in the movie version of It Is What It Is?

I don’t want it to be a movie because I think that Hollywood is overrated. These days, if they made a movie about me, they’d have to turn me into a super hero. I’d just rather this stays a play. And, um, no one is playing me, but me!

Thomas will be performing It Is What It Is starting Thursday, October 19 at New York City's Flamboyan Theater, through October 22. On October 23, there is a gala performance to benefit CAT Youth Theater, a free, award-winning, after-school program that helps young people thrive on stage and in life; it's where Thomas got his first training in the theater. Tickets are available here for October 19 - October 22, and here for the Oct 23 benefit performance. 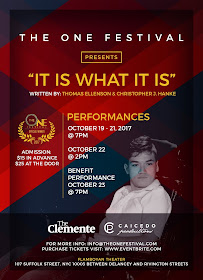