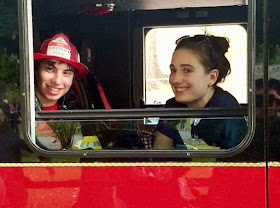 Max had a fantasy come true this weekend, when he got to ride a fire truck in a parade. And not just any parade. He was in the Tarrytown Halloween Parade, close to Sleepy Hollow (of Ichabad Crane and headless horseman fame.) It attracts some 20,000 people a year, and the fire truck leads the parade. Max was seated inside.

If you have a child with disabilities, then you are used to cajoling, pushing and otherwise doing whatever you can to get your child included in activities and, well, life in general. Over the years, I've finagled Max's way into some activities and have had him outright turned away from others. Then he decided he was going to become a firefighter, and suddenly accommodating him wasn't so hard at all.

The guys at our local station were glad to boost him up into trucks so he could sit there. Three years ago, a couple showed up at our house in his favorite truck on the day of his birthday party, drove him to the place then hung out. They're a great team who respect Max, enjoy chatting with him and like to make him happy.

Max has long had a fantasy about riding a fire truck in a parade. The timing's never worked out for our local one on Memorial Day, because we're usually away. Max used to talk about it a lot; I found this card from 2015 when I was going through his room over the weekend. 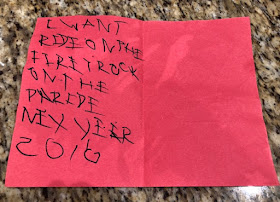 Grandpa Michael, Dave's dad, lives in Tarrytown and decided to try and get Max into the parade. He walked into the fire station the other week, explained Max's firefighter aspirations and made the ask. They called back the same day and said yes. Just. Like. That.

There was no red tape, no forms to sign, no minds to change. Nobody asked anything about Max's disability. The fact that it happened so easily was astounding.

Max was out-of-his-head excited. Anytime I mentioned the parade to him he'd giggle in anticipation. I ended up staying home with Ben because we didn't think Ben would appreciate the crowd; Dave texted constant updates.

Max, Dave and Grandpa Michael met Captain Rich at the start of the parade at 5:15 p.m., Max dressed in his trusty fire hat and the official coat our local fire department had gifted to him.

"Do you want your dad to ride with you?" asked Captain Rich. 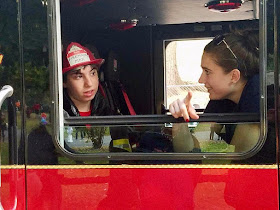 Fireman Max rode with Firefighter Meagan, who remembered Max hanging around the previous year. Dave boosted Max into the truck and off they went. At times Max looked like he was in complete disbelief, which is what happens when your fantasy comes true. At times, he waved at the crowd.


Afterward, Max called and asked if I'd seen the videos Dave had sent. Oh, yes. A whole bunch of times.

"Did you have the best time?" I asked.

I felt ecstatic for him. And then, I felt a pang of if only more people were this welcoming.

Max was pretty zonked when he got home Saturday night, but he did have one question he urgently wanted me to answer before he fell asleep: