The Starbucksization of our town 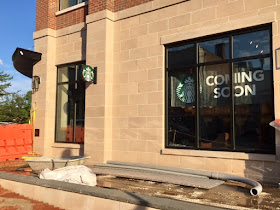 A Starbucks is opening in our town soon, a happening that's been as hotly debated on my local Facebook group as anything our president does. I've had mixed feelings. (About Starbucks.)

If I had to choose between coffee chains, I'm Team Dunkin'. Dave is Team Starbucks, so he's psyched, but I find their coffee bitter. While I like Fraps, my waistline sure doesn't. My favorite is their shaken iced tea (Passion Tango), and when cravings strike it's easy enough to grab one from the town a mile away. I get my iced coffee (Jamaica Me Crazy) from the coffee shop in town I've frequented for the 15 years that we've lived here. Some Facebook commenters worried that it, along with the coffee-serving bakery shops, will suffer from lost customers.

I love our town's core shopping district, with its mix of independent stores. It's charming and old-school awesome. I enjoy buying gifts at the toy store, where the owner, Erin, always has cool recommendations, and browsing in the bookstore with the kids. We have no McFood places because of an ordinance restricting fast-food chains; town officials said Starbucks isn't one, but perhaps they were buzzed from their double-shot ventis.

Other commenters pointed out the positives, like new jobs—one woman posted that she was going to be working 20 hours a week, with good benefits and plenty of time to spend with her girls. Someone noted that towns need to modernize, and that when ours first got a nail salon there was an uproar. This Starbucks will stay open till 10:00, unlike the coffee shop that closes around 7. And because it won't serve a full menu of food, people don't believe the coffee shop will be affected.

One person hoped this was one of the Starbucks that serves wine and beer. But: no.

In the end, I don't think we're on the verge of a coffeepocalpyse. The Starbucks could attract more visitors to town, who might then shop at other stores. Not for nothing, people looking to move to our town are more likely to be excited than alarmed by its presence. Those like me who already have their preferred fix for caffeine will likely stay loyal, and the Starbucks crowd can have their Frap and drink it, too.
Ellen Seidman at 6:36 AM