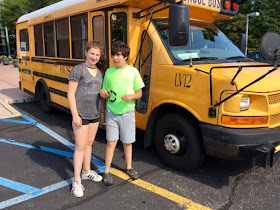 For years, Max has happily attended programs run by the Friendship Circle. Last spring, Sabrina announced that she wanted to volunteer at their summer camp. It was seriously exciting.

Since I've had Max, I've met countless teachers, therapists, and program staffers who decided to work with children with disabilities because they had a sibling or other family member with disabilities. One mom of two in my neighborhood became a speech therapist after her son had delays.

I've always wondered if Max might influence Sabrina that way. In general, we don't put pressure on her to help Max. She naturally lends a hand here and there, but she and her big bro otherwise have a typical sibling relationship, fights and standoffs and all. She is fully aware that Max has plenty of abilities, and at times when he tries to get us to do stuff for him she's all, "Max! You can do that yourself!" There's no pity there, just your usual sibling drive for parity.

When Sabrina said she wanted to pitch in at the FC camp, I gave her a high-five, and told her that was awesome and the kids would love her. What I was thinking: "Phew, we seem to have done something right raising you."

Camp started Sunday and ends today. Sabrina ended up working in the siblings group, brothers and sisters of children in the main program. After I dropped off Max, I saw her making lanyard chains with a little girl and walked over to say hi.

"You're so lucky—she knows how to do all the lanyard stitches!" I said to the girl.

Sabrina shot me a look that said, "Please leave right now before you embarrass me any more, MOM!" I slunk away.

Max, who is fond of making plans, has already put in a request to attend camp next summer. I told him he could. "Would you like to help at camp?" I asked. He's always been the beneficiary of these programs; I wondered if he might want to help the younger kids. Being a volunteer would be a great step toward independence, and likely confidence-boosting as well.

"No!" he said. So he's not yet ready for that, but I think one of these years he will be.

Meanwhile, Sabrina would like to keep volunteering for FC's year-round programs. So proud of this girl. Just don't tell her I said that, k? 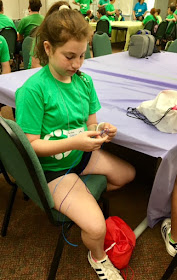