This is his big brother who takes care of him, and that's how he'll always see him 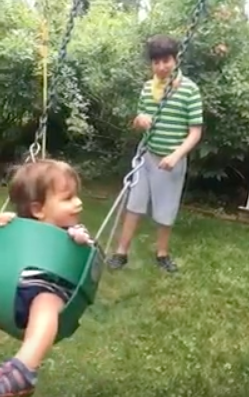 We inherited a swing set from friends this summer. Ben loves the swing, and Max loves pushing him. It makes me really happy to watch the two of them together, and see their relationship blooming. Unlike some people, Ben sees Max for who he is.


Max and Sabrina are always watching over Ben. "No, Ben!" Max informs him when Ben tries to use the couch as a jungle gym. "Benny! You're going to get your fingers stuck!" Sabrina says as Ben opens and shuts all the doors. "Benjamin! Eat the pasta!" Max cajoles him at mealtime.

Ben doesn't yet see any difference between his older siblings, other than the fact that he's now able to point out who's a boy and who's a girl. Perhaps he never will. All Ben knows is that he's got a brother and sister who look after him, play with him, squeal when he does something cute and generally love him to pieces.

As he grows up, Max will be that same person in his eyes: a brother who is there for him. He will likely have questions about his cerebral palsy, but he won't think of Max as special or treat him with kid gloves, as is true of Sabrina. (Hopefully, he will stop trying to bite Max when he gets on his nerves.) He won't think of Max as someone who can care for him "despite" the cerebral palsy—how it seems people sometimes view people with disabilities.

I've heard it implied so many times over the years:

Thinking that someone achieves things "despite" a disability unintentionally demonizes disability, making it out to be a nefarious force when, in fact, it is an organic part of a person. Having a disability is not all of my child, but one aspect of who he is. Too often, people can only see that one aspect.

To be sure, Max has challenges to overcome. And it's true that as his mom, I don't take his accomplishments for granted, something instilled in me from the doom-and-gloom predictions at his birth. Still, the way I see Ben treating Max makes me wish that people treated Max more typically. Not someone who succeeds "despite" his disabilities, but someone who is the whole package of challenges, competence, abilities and potential, like any one of us.
Ellen Seidman at 6:43 AM