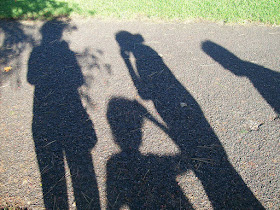 I tried not to stare, but I couldn't help it. I was at an event with Max this weekend, and two young people with disabilities were talking with each other. Their conversation had gone on for a good 15 minutes, and I kept looking over as they smiled, laughed and nodded. I wondered what they were chatting about. I wondered when Max would reach that level of engagement with a friend.

I've been having all the feels these past couple of weeks, with Max graduating from middle school. He's growing up, fast. But the reality of him going to high school (HIGH SCHOOL) has me pondering his progress.

Eventually, the compare-a-thons stopped as I grew to accept Max for who he was, and embrace that he was on his own timeline and nobody else's. There wasn't one particular thing that helped me to do that; it was the passage of time and Max's continued development...as well as my own. I've often said that as Max has made my progress, so have I. It's been an evolution for both of us. I suspect that will always be true.

And so, I was surprised to find myself comparing Max to these other teens, and feeling both wistful and a little bummed. Max is plenty social and chatty. "How are you?" he regularly asks me and others, and he means it. He's just not at the point where he has extended conversations with peers, and it hurt to watch the other teens enjoying each others' company in a way that Max can't yet.

As self-aware as you may be as a special needs parent, it doesn't stop those old yearnings from resurfacing.

The hurt ebbed away after we left, only to be replaced by a reminder that Max loves life as he knows it, and that I need to quit projecting my wants onto him. This week, the parent of a student in Max's class had stopped by as they watched something on the whiteboard, and came upon Max holding her daughter's hand. "They held hands the whole time I was there," she said.

I welled up as I stared at the photo she sent. 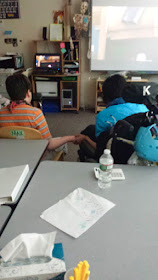 He's content. He's got friends and relationships, even without conversation as I know it. He's happy.

And once again, I packed my feelings away and took heart in the reality of my beautiful boy.