Wonders never cease when you have a child with disabilities 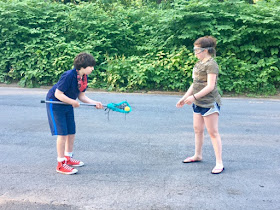 I was upstairs changing Ben's diaper when I looked out the window and saw the most amazing thing: Sabrina was teaching Max how to play lacrosse.

It's not that I didn't think Max was capable of trying his hand at lacrosse—I knew he was. His dexterity and grasp have improved. He can play catch using both hands. He enjoys being competitive, as was very apparent at The Special Olympics last year.

It's that every single new thing he pulls off is a thrill, because I know just how far he's come.

I've often said that I don't look at Max and see a child with cerebral palsy—I see Max, a son as perfect and imperfect as any of my children. But whenever he scores an achievement, I also see his past.

I'm not just seeing a boy standing and playing with his sister on the street; I'm seeing a boy who for so many years could not play on his own because he didn't understand how.

I'm not just seeing a boy listening to his sister give him instructions; I'm seeing a boy who took a long time to understand spoken sentences.

I'm not just seeing a boy maneuvering a lacrosse stick; I'm seeing a boy who worked so hard at ages three, four, five, six, seven, eight, nine to learn to grasp a drumstick, a spoon, a pencil.

I'm not just seeing a handsome, cheerful, good-humored boy focused and engaged. I am seeing the boy who has turned out like anything but the dreadful, gloomy predictions of the NICU doctors.