He doesn't trust me to read food labels. Woo hoo! 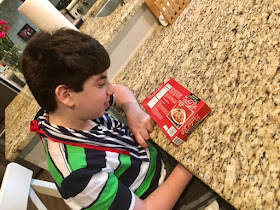 I walked into the kitchen to find Max digging through the garbage.

"What are you doing?" I asked, a reasonable question.

Max continued to poke around, not saying a word. Then he pulled out a box for Trader Joe's baked ziti; the tray was heating up in the microwave.

He wanted to know if it had nuts, which he's allergic to. Usually, Max's pasta fix is TJ's mac and cheese but last night I'd planned on eating ziti for dinner and Max decided to have it as as a bedtime snack. He's eating like a teen boy these days.

Max proceeded to take the box to the table, sit down and stare at it. He needed to see that there were no nuts.

It was an exciting moment for me, even if he stole my dinner.

As Max gets older, the thing I want most for him is independence—which starts with him caring about his well-being. For a while now, he's been making sure that new foods he tries do not have nuts. This was the first time he thought to look at the box. And it was the first time that he didn't just take my word for it; he wanted to see for himself.
Max is also on top of taking his anti-seizure meds, which come in compounded form. Last weekend, while we were out to dinner, he started shaking his hand up and down and gesturing toward my bag. Eventually I realized that he was mimicking shaking the powder into food—a reminder for us to give him his meds.

I showed him where the ingredients list was on the Trader Joe's package, and pointed to the bottom where allergens are called out.

"That means it has no nuts," I explained.