Accommodating children with disabilities: Anything can happen, if you let it 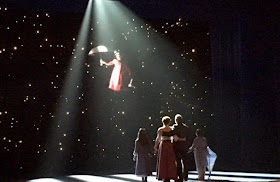 I took Max and Sabrina to see a sensory-friendly showing of Mary Poppins on Friday. The performance was great, but equally so was the overwhelming gratitude I felt that kids and teens could do their thing at their performance—make noises, run around, ask loud questions—and it was all good.

The Paper Mill Playhouse in Millburn, NJ, was the first professional theater in the country to offer performances for people with autism and other developmental disabilities. A couple of weeks ago, the National Endowment of Arts awarded its Theater for Everyone programming a $40,000 grant. (Yet another reminder to write your elected officials about supporting funding for the arts.) In recent years they've had autism-friendly shows for Elf, The Little Mermaid, The day before the performance, ticket holders were invited to "Meet Your Seat," a free open house to help soothe children who may be fearful about attending a performance.

I noticed sensory play stations and a Chill Out Zone as we walked to our seats on the mezzanine level. If the show got to be too much, a child could come out to the activity area, hang out and watch the show on a monitor. There were trained professionals and volunteers standing by to pitch in. Along with the playbill we were handed a paper with photos of the performers, plus a summary of the plot. (Parents can also check out a sequenced social story on the website prior to the performance, complete with photos of the grounds and theater interior, along with production photos.) 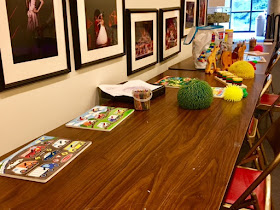 The lights stayed on low throughout the performance; the sound level was at a lower volume. Snacks were welcome. Kids made various noises throughout the performance, and it was OK. One boy stood by the side of the stage holding a glow stick. No problem. Another boy ran down the center aisle up to the stage; his mother was right behind him and escorted him back to his seat. No biggie.

"You should not be concerned that anyone's behavior will interrupt the show," reads Paper Mill's FAQ. "The actors have been prepared for a variety of sounds and movements."

I usually have a low tolerance for musicals, and the movie version of Mary Poppins lulls me into a coma. But the Paper Mill production was amazing, and we all sat there enjoying the singing, sets and magic. I stole glances at Max and Sabrina to watch the joy on their faces. For once, unlike other times when I've taken Max to shows or movies, I didn't have to worry about him asking me questions during the performance—who's that? Where's she going? Why's he doing that?

I considered how lucky we are to be living in a time in which people recognize the needs of our children. I can't recall sensory-friendly anything when I was growing up, let alone shows on Broadway. These programs were not even around when Max was little.

We may have a ways to go in terms of people understanding what it means to have autism or cerebral palsy or Down syndrome, or to be afraid of loud noises and crowds, but there's a growing awareness that our children deserve accommodations that allow them to enjoy the same pleasures as their peers. And for that, I am seriously grateful.

One of the last songs in the play is "Anything Can Happen." The first few lines:

Anything can happen if you let it

That is so true when it comes to accommodating people with disabilities. It's not that hard; mostly, it's a matter of people opening up their minds more than their wallets.

Anything can happen...if you let it. 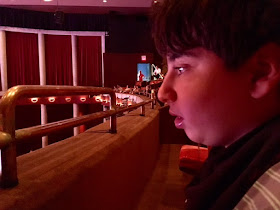 8 ways to include kids with special needs in programs, events, classes, camp, wherever
Ellen Seidman at 6:38 AM