Those times when you think about your old life 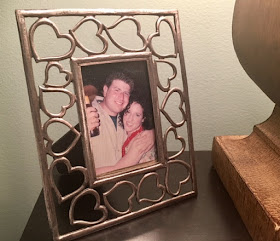 I don't think much about the responsibilities I have as a parent. This is because I'm too busy being a parent. Sometimes, though, they weigh heavily on me, especially when I flash back to my pre-kid life.

There's this poor plant in our bedroom that's very neglected. It's an allium, and every so often a purple-pink flower blooms that looks like a firework and wows us all. This weekend, when I remembered to water it, I noticed the leaves were pretty dusty. All of a sudden I flashed back to my bedroom in the apartment I rented during my twenties.

I had a little multi-colored pepper plant I kept on a stand. I loved that thing. One day, I noticed white specks all over the underside of the leaves. I got our downstairs neighbor to pay a house call, a woman in her thirties who seemed to know about such things. She told me they were aphids, an insect. Ugh.

I tried my best to rinse off the leaves with dish soap, and checked them obsessively. The specks stayed. Finally, I had to toss that plant.

I stood there in our bedroom mulling over the fact that I used to have time in my life to wash plant leaves, and that back then an ailing plant was such a great cause for concern.

OMG, look at everything you deal with now, I thought.

As if to prove that, yesterday brought several big-deal happenings. In the afternoon, as I sat playing with Ben on the living room floor, I noticed a pea-sized lump above his collarbone and below the benign cyst on the side of his neck that we'll eventually have to remove.

I felt sick to my stomach. Scary thoughts flooded my head about what that lump could be. I jumped on the phone with the nurse practitioner at the doctor's office. Within seconds, she'd called up the imaging of Ben's neck. She noted that the cyst was a pretty lengthy one that extended from his neck downward, and that another part of it was just now becoming visible. We'd discuss the surgery in more detail at our next visit.

The panic dissolved. But I kept thinking about that pepper plant, and how relatively carefree my life had been back then.

Later in the day, Dave forwarded me an email with the subject line "County mosquito notice." As if my chest didn't instantly tighten up enough, he wrote, "Bug spray needed bigtime." Thanks to the excessive rainfall of recent weeks, our county would be conducting an "aerial larval control operation" using naturally-occurring compounds. Good news: They're on it. Inescapable bad news: We are in for one helluva mosquito season. I have not been one to worry about Zika...until now.

In the early evening, the headlines started popping up about the explosion and fatalities at the Ariana Grande concert in England, leaving me sad and concerned about the kind of world I'm raising my kids in.

Then I got drawn into the business of bedtime.

Ben wanted to read and re-read a book about trains. He made cute faces in the bathroom mirror as I held him and brushed his teeth with the baby toothbrush. He pointed to the lights so he could switch them off. I put him down and watched as he sucked his thumb. He only does it when he's falling asleep, and every night it makes me melt.

Then Max and I did a book report about Crispin, an atypical dragon who breathed teddy bears, whipped cream and everything but fire. Max gave a happy squeal because he loves whipped cream. His squeal is one of my favorite sounds ever.

Sabrina was in her room doing homework for most of the night, but at 8:30 she came downstairs, we talked about weekend plans, and she said "Good night, Mommy" sweetly as she always does.

Once again, I was reminded that I wouldn't trade these days for any.
Ellen Seidman at 6:37 AM