The feels you feel when your baby is born sick 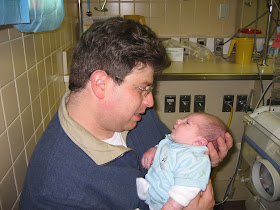 Yesterday, I watched Jimmy Kimmel's emotional monologue about his newborn son, William. He seemed normal after birth, just as Max had. But three hours later, a nurse detected a heart murmur and noticed William was a little purple. Testing revealed he had heart defects. He successfully underwent surgery—"the longest three hours of my life," said Kimmel—and will require another open-heart surgery a few months down the road, along with a procedure as a teen to replace a heart valve.

I cried for Jimmy Kimmel and his baby, although there was a happy ending. They are now part of a club of parents nobody ever wants to belong to: parents whose babies were sick at birth. I cried for myself and Max, too. Fourteen years after Max came into this world, there is still a raw spot in my heart and soul about that time. It flares up when I read about other newborns going through traumas.

Kimmel and his wife were blindsided by what happened, understandably so. If you/your partner have a healthy pregnancy, with no known risk factors, you may have some anxiety about the birth. But still: You do not think that anything really bad could occur. Not heart disease. Not premature birth. Not seizures and a stroke, as Max had.

Paired with that shock is the deepest anxiety you have likely ever experienced. Because this tiny creature of yours—the one you only just got, the one you'd been waiting and waiting for—is imperiled, and you are helpless to come to his rescue. You may google like mad looking for answers, query all the doctors you come across in the NICU, speak with any and every baby doctor you have ever known. But still, your beautiful baby is lying unconscious in a glass incubator with tubes and wires coming out of him and there is nothing you can do.

You are sick with worry. You are overwhelmed and bewildered. It all feels surreal, like you are in some bad made-for-TV movie.

As sorry as you feel for yourself, you may feel even worse for your partner. Dave is not one to be overly emotional, and in the course of several days I saw him go from one extreme to the other.  I can still vividly recall his face in the operating room (I had a C-section) as he cradled Max in his arms and stared at him wondrously. He was instantly in love. I can also vividly recall Dave's face crumpling when the pediatric neurologist told us, as we sat in a conference room, that Max had a stroke. I felt worse for Dave than I did for myself. We both wailed that night in the hospital room.

As you are reeling from all of this, you have to absorb a whole lot of medical information being thrown your way (and then, you end up googling more). You may have to learn procedures, like the couple with a baby in the incubator next to Max's who had to occasionally tap his heart to keep it pumping. You might have to make a major decision about surgery, as The Kimmels did. You are no medical expert but literally overnight, you become one.

Somehow, you need to keep your focus during the hardest conversations. After the neurologist told us about Max's stroke, he gave a brief lesson on the parts of the brain that were affected so we could better understand the functions that were at risk. A resident later showed us the MRI images of Max's skull, and the involved areas. The white parts—on both sides of his brain, because he'd had a bilateral stroke—were the damage. There, in black and white, lay the destruction of my baby and my own destroyed dreams. The resident spoke about brain plasticity and the ability for regrowth to occur around the damage. Still, nobody could explain why the stroke had happened, or what the future held for Max.

Perhaps you also fret about whether something you (or your partner) did caused a problem. Did you not eat the appropriate foods? Was it the few times (well, more than a few times) you didn't remember to take the prenatal vitamins? Could it be that day you slipped on the stairs and sat down hard on your butt?

You may also worry about letting your family and friends know that something bad has happened. My mother, father and sister were out-of-their-heads excited about Max's arrival. I was so thrilled to give my parents a grandchild. It made me even sadder to think of how devastated they'd be. My dad was the kind of person who did not expect life to do right by him. And now, his first grandchild had a stroke, of all things. The conversations were excruciating. My father looked so somber when he came to the hospital. I hadn't gone into detail about the implications of the stroke to try and spare my parents some heartache, but Dad was a really smart, well-read man and he knew the damage a stroke could cause.

You may feel so alone. Nothing anyone said was a consolation to me. How could anyone truly understand the hell we were going through? Other friends had recently had babies who were totally healthy. Why did this happen to us?

On top of everything, you may be stressed about paying for the hospital bills. We were fortunate to have had good insurance, so our out-of-pocket expenses were not so bad. (The flawed-but-fixable Affordable Care Act has two key mandates that are crucial to parents of sick children or any ill individuals: Insurance companies can't deny coverage for pre-existing conditions or cap the amount of coverage in a single year.)

Meanwhile, you are a sleep-deprived zombie going through the motions of showering, getting dressed and eating, never mind that you might be healing from a C-section. Sleep brings little respite or relief. If your baby is in the NICU for an extended stay, you may lie awake wondering about him and feeling awful that he is there in that big room without you. The day we came home that second week of Max's NICU stay, I stood in his empty room and wallowed in grief. After that, I shut the door so I wouldn't keep torturing myself.

When I think about what happened to Max, as I did after I'd watched Kimmel's monologue, it comes back to me with intensity. It does not feel like fourteen years ago. I can vividly picture how Max looked in the incubator, the hallways of the NICU, the somber face of that pediatric neurologist as he talked to us on that fateful day.

Like Jimmy Kimmel, though, we were lucky: We got a happy ending. 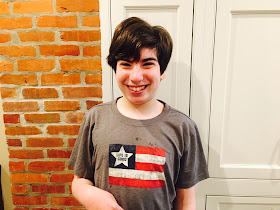