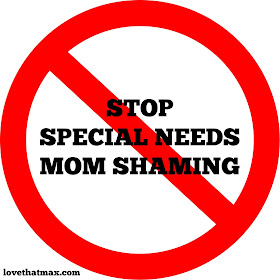 Recently, when we visited a dude ranch, I was chatting with another mom when I heard Max's distinctive screech from across the lobby. I excused myself and arrived to find him upset. Nothing had happened; he was just overly tired. He'd been doing a lot of activities and he tends to poop out sooner than other teens. Because of the cerebral palsy, his muscles work extra hard.

"AAAAAAAAARGH!" said he, and like the beasts the character Max confronts in Where The Wild Things Are, my Max roared a terrible roar and gnashed his terrible teeth.

There were a lot of people around. Some kids stopped and stared, along with their parents. "Man, she needs to keep that boy quiet!" said a nearby mom, and I turned to her and gnashed my terrible teeth only I think she missed it.

You know how it goes.

Your child is having a meltdown: in a restaurant, at the supermarket, in Target, at a park, in whatever public place. Even as you channel all of your energy into calming him, you notice the looks directed at him...and at you.

Dealing with a child with special needs losing it in public can be a double whammy. Not only do some people wrongly assume your child is a brat, they may figure that you are a crappy mom to boot. It's something parents of children with sensory issues, autism and other special needs regularly have to contend with.

Mom-shaming is pretty rampant, reveal findings of a survey by Beech-Nut, the sponsors of this post. Nearly 80% of 1,000 millennial moms polled have experienced some form of shaming, and 68% agree that the problem is more of an issue now than it was five years ago. This is why the company's launched a campaign, Turn The Labels Around (hashtag #ShowMomsLove). It calls on moms to stop shaming and to come together to support each other. As Beech-Nut Veep Andy Dahlen puts it, "The only label that matters is 'mom.'"

As a parent of three, I've experienced various forms of mom-shaming over the years: Disdain from another mom when I showed up late from work to a school event, tsk-tsking when I've discreetly nursed in public and, once, disbelief from a mom who asked how I could spend a weekend away from my kids when I mentioned that I occasionally attend blogger conferences. I'm lucky that I live in an area where most people are open-minded. Shaming was at its strongest when Max was younger and had major sensory issues. Going to new places—restaurants, museums, kid events, amusement parks—freaked him out, and he'd regularly have the mother of all meltdowns.

Shaming moms of children with special needs delivers an extra helping of hurt. That's because we are typically doing our best (well, most days!) to help our children navigate a world that can seem scary, and our nerves are already frayed. Getting the evil eye when our child is acting out because of sensory or cognitive issues is rubbing salt into an open wound.

Sadly, according to the survey 78% of moms have experienced shaming or judging by their own mothers or other family members. I've had the opposite experience with my mom. While she's been known to nag me for leaving the house without lipstick, she has been wholly supportive of my motherhood since Max came along 14 years ago. I can't say the same about all my family members, including one who used to chide Max at birthday parties when he wanted to help open presents.

Mother's Day is coming up, that wondrous occasion of breakfast in bed, homemade cards, flowers and goodwill toward moms everywhere. This survey is an important reminder that moms need to be kind to each other year-round. Judge less. Empathize more.

At times, I've called people on the shaming. When we were at a children's museum a couple of years ago and a mother kept glaring at a hysterical Max, I said, point blank, "He has special needs and he's overwhelmed right now. Thanks for your patience." She seemed taken aback that I'd spoken up and blurted "Sorry!" I hope it gave her pause for future stare-downs. You never do know why a child is losing it.

You also never know how much a kind glance or a few words can mean to a mom. Several years ago, we were in a restaurant and desperate to subdue Max, who was wailing loudly. Finally, we distracted him with a video. I felt drained and sad. A mom at another table caught my eye. "You OK?" she mouthed. And that was exactly the comfort I needed.

This post is sponsored by Beech-Nut, but all opinions are my own.
Ellen Seidman at 6:40 AM