The discrimination parents with disabilities have to deal with 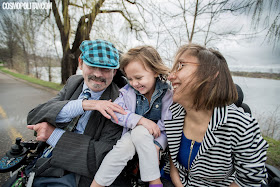 Having a newborn in distress was the most traumatic thing I've ever been through in my life. I can't imagine how much more horrible I would have felt if hospital staffers didn't have my back—exactly what happened to Nikki Villavicencio after she gave birth. Her daughter, Alley, was coughing up blood and her stomach was swelling. Nikki, who has arthrogyposis (a condition that restricts joint movement) and her husband, Darrell Paulsen, who has cerebral palsy, met resistance at the children's hospital where their daughter was transported.

As told in a new Cosmopolitan article by Kathryn Joyce, staffers reportedly griped about their wheelchairs in the exam room, informed Nikki they wouldn't help her breastfeed and suggested that Darrell wait down the hall. Alley, now 5 years old, would turn out to be fine. But for Nikki and Darrell, this was just another uphill battle they would face in their lives as disabled parents. And now, they are trying to pave the way for other parents with disabilities.

These stories make headlines from time to time. You may recall Kaney O'Neill, a woman with quadriplegia whose ex sued for custody of their child (she won), or that time when Canadian authorities threatened to take away the baby of a couple who both have cerebral palsy (the authorities backed off).

The piece brings to light other instances of bias against parents with disability, including the fact that it's not uncommon for Child Protective Services to get involved and the general sentiment that they are not able to parent. One 40-year-old mother with cerebral palsy recalls a hospital staffer asking her, "How are you going to care for a baby?" The answer, of course, is with love and ingenuity. Mothers with disabilities find a way. Nikki uses her feet to handle utensils, and smooths Alley's hair holding the brush in her teeth.

Yes, these parents have challenges; theirs are just more visible than others. Yes, raising children involves a fair amount of physical labor—but there's no one "right" way of doing things. Good parents come in all shapes and forms. Nikki and Darrell seem like good people; their daughter is lucky to have them.

The couple, who live in Minnesota, proposed legislation aimed at protecting parents like them. Called the Parenting with Disabilities bill, it aims to help parents in the state apply for adaptive equipment and allowing their personal care assistants to pitch in with small parenting tasks. It passed through two House committees in February, and moved on to ones in the Senate. Hopefully, there will soon be a pilot program in place—and other states will follow suit.

As the parent of a child with cerebral palsy, I am all too aware of the no-can-do discrimination he faces. People see the disability, not ability. "As a person with disability, and as a woman, I felt the world didn't see me as a caretaker," Nikki says, but rather, "someone who needs to be taken care of." Hopefully, her and Darrell's efforts will keep getting attention—and enable people to move past their dated ideas about disability. Parents have enough to deal with. Assuming incompetency because of a disability is one hurdle they shouldn't have to overcome.