Learning to own your child's differences 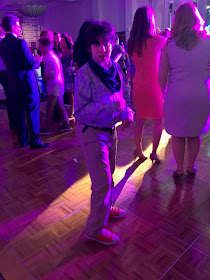 The ideal, of course, is for your child with disabilities to own his differences. Max has never paid much attention to what other people think of him, for better and for worse. For me, it's been an evolution, and I'm in a pretty good place as this weekend revealed.

Our family attended the bar and bat mitzvah of twins Lucy and Josh, the children of one of my best friends. We all got dressed up. Max decided to wear his new red Chucks. My younger mom self would have been concerned that they would make Max stand out from other guests. This mom thought, He is going to look so cool. At temple, Lucy glanced at Max's sneakers and gave him a thumbs up, and Max beamed.

As we sat through the beautiful service, it occurred to me that we were likely going to run into a problem. Dave and I had been given the honor of opening and closing the ark for the Torah scrolls to be put away, along with another couple. I realized, belatedly, that Max was going to want to come up there with us. When I explained that he needed to let Dave and me go alone, he got weepy.

My younger mom self would have gotten anxious. This mom decided what would be would be. I knew that my friend, one of the more caring people in this world, would get it.

The rabbi called me and Dave up to the ark. Dave happened to have stepped out of the sanctuary with Ben, and so Sabrina dashed off to get him. I walked up and stood next to the other couple. I watched as Max sat there and got worked up and Dave struggled to get him to stay put.

I motioned to Dave to bring him up.

"You sure?" Dave mouthed back.

I caught the eye of my friend, who smiled and said, "It's OK." I nodded at Dave.

And so, Dave and a teary Max approached the ark.

This mom was grateful for an understanding friend, and if other people in the room weren't the same, so be it. This mom stood calmly in front of the ark, smiled at her son, kissed him on his head, and helped him close it.

There were two big buses outside the temple to transport Lucy and Josh's friends to the party. Max didn't know any of them, but decided he wanted to go because he loves bus rides. I asked Sabrina if she wanted to accompany him.

"No, that'll be weird!" she said. "The buses are for their friends!"

My younger mom self would have also thought that Max would look weird. This mom approached a bus monitor, asked if there was room for Max, asked if she'd give Max a hand getting off the bus at the party venue, settled Max into a seat and left, glad for the joy ride.

At the party, dozens of tweens and teens danced, played video games and ping-pong, and took turns taking silly pics at the photo booth. Max wandered around the dance floor alone, mesmerized by the videos on screen.

My younger mom self would have felt sad for him and stuck by his side. This mom let him do his thing. He was happy. I was happy.

Max is his own awesome self. I am longer that mom.
Ellen Seidman at 6:38 AM