Finding a school for your child with disabilities: What you can learn from our journey, part two 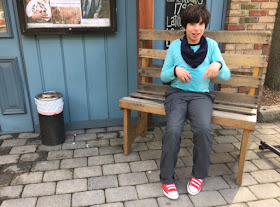 This is the part two of our journey finding a high school for Max (part one is here).

One day in November, I went on a tour of the school Max was interested in going to mainly because his friends were there. It's a school mainly for students with Down syndrome, intellectual disability and autism. In many ways, it's similar to the school he is in now. Students are grouped by abilities, not age. The student-teacher ratio is 4:1, with a maximum of 12 students per class. I know parents who have children there, and they've all raved about it.

There are three vocational classes a week, a good life skills programs, meet-ups with students from other schools and a range of extracurricular activities. Students take regular trips into the community and to the local library. They have an excellent job skills program and a dedicated employment agency for graduating students. It was all good, other than the fact that Max would receive only one physical therapy session a week, not two, as is the school's policy no matter what a child's IEP.

As I sat waiting for my tour, I heard "It's Max's mom!" A former student from Max's class, one of his friends, ran up to me and gave me a hug. She was en route to cooking class.

"Are you happy here?" I asked.

"YES! Max should come here!" she informed me.

Max spent a full day at the school. When I returned to pick him up, I ended up standing in the lobby with the principal, the vice principal and a couple of staffers. A teacher brought Max over, who promptly burst into tears. He jabbed at the ground and said something.

The principal reassured him that was very possible. The school accepted him the very next day. After that, Max started calling it his "new school."

I wasn't done yet, though; I still needed to see schools with integrated programs.

As the parent of a child with disabilities, you try not to project your own desires, wishes and wants onto your child. Yet even though Max had decided he was going to that school, I felt I owed it to him to check out ones where he would have peers both with and without disabilities, to prepare him for the real world.

Max has a good life, but between school and his activities, he exists in a special needs hothouse. He does not have friends who are typically developing other than Avi, a teen he hangs with once a week through a Friendship Circle program. Although I do not yet have a sense of what adult life will mean for Max, high school seemed like a ripe time to expand his existence. Dave agreed.

There weren't that many choices for integrated programs; our own town didn't have anything that was a fit for Max. I had our case manager reach out to another town's public school with an integrated program, along with a school that was not geographically desirable but I'd heard great things about.

I met with the program director and social worker at the local school (doing a school search can be a fairly time-sucking process, yet another reason why it's good to start early). I noted that Max had academic challenges. I also said he loved school, he was eager to learn, he was curious and he was amazingly social. They decided to have him spend a day at school and dropped him off.

Max would be in one of several self-contained classrooms solely for students with intellectual disabilities. Integration was relative; at this school and similar ones, it wouldn't have been possible for Max to have been in a mainstream class, even with an aide, because academically he is not at his peers' level. All classes in the school came together for lunch and electives such as art.

I picked up a very happy Max. He'd done well that day. But the program director told me he'd need an aide. Max requires someone to help with toileting, and no aide in the class would do that (pulling up and down pants: still a work in progress). Plus opening the bathroom door and other doors in the school would be a challenge—you needed to first hold up an ID card, then pull a big door handle and heavy door

In the next couple of months, I had a conversation with the head of a program at another out-of-district school that came recommended by a mom. The program was crowded and they were on the verge of purchasing a new building, but there was no guarantee things would be in place by September. After sitting next to a mom at an event and hearing great things about another program, I had our district send over Max's records to that school too. Our case manager got back a faxed letter that said, simply, the school could not "accommodate" Max.

I asked her what that meant. She did not know. Upset that Max had gotten turned down without a meeting, I called to speak with the program director and got her assistant on the phone—who explained the program was already at capacity and was not accepting out-of-district students. Ah. So it was a quantity, not quality, issue. I emailed the director and noted that it would be much more of a consolation to parents if she could just specify that in correspondence, rather than the vague "could not accommodate."

The worst rejection of all came from the far-off school. Our case manager said they had turned Max down because they felt their program was too "fast-paced" for him. I asked to know more. It turned out they had come to Max's class to observe another student, and that while they were there they had also done some sort of observation of him. Without my consent. Without talking with any of the staffers about Max, or with Max himself.

I was furious. I reached out to the social worker from that school who'd been part of the observation team and the head of the program, whose sole response was that I should be in touch with my case manager. I called the superintendent of that district and expressed both my disappointment that they had turned Max away, and outrage that they had done any sort of observation of him without my consent. She apologized, but didn't have more to say. I spoke with an advocate, which is when I learned the school had the legal right to reject him, although she wasn't sure that they'd legally had a right to observe him without permission. I chose not to pursue that.

While IDEA entitles every child to a free and appropriate education, every child is not an appropriate fit for every private school program," noted Renay Zamloot, a non-attorney education advocate. "Even though you believe your child may be a good fit for a program, the professionals who reviewed his file and observed him do not agree. They do not think he would receive an 'appropriate' education because it is not a good fit."

For a while, I was completely dejected, which is unlike me. I have typically succeeded in getting what is best for Max, whether at school, in programs or with his therapies. I felt like I had failed him, because in my mind, I did think an integrated program was best for him. Wrapped up in all of this were my anxieties about Max's future. I felt like my high-school choice would make or break his life as an adult. Rational? Well, not totally. But when are emotions ever rational?

It would take several things to help me accept that a program that had turned Max down as not being right for him likely wasn't right for him—and that sending him to the school he'd always wanted to was best possible choice.

First, I reached out to an academic higher-up I've long known and talked with her about what I'd been through finding a school for Max. She noted that she had cousins at the school in one of the programs from which he'd been rejected. Her cousins were not mainstream kids in that they were musical, artsy types and she said that the students there had not been very welcoming to them—a mindset that she felt would not be beneficial to Max. She noted, too, that integration is not always the right answer. As she said, "We want our kids to be as embraced as possible."

Then I had a heart-to-heart with my two closest friends over lunch. I told them about my desire for Max to have friends of all abilities. One of them talked about a friend of her daughter's who has intellectual disability. The girls have grown up together. But her daughter had grown increasingly distanced from this other girl, who at the age of 13 was still into playing with dolls. On occasion, the two hung out but they did not have much of a connection. I understood the point, even if it was painful to hear.

A few days later, I posted the same question in my local Facebook group and in one for parents of children with cerebral palsy: I asked if anyone had a student with physical and intellectual disabilities in an integrated program in a public schools and then I asked whether any of them had so-called typical friends.

One mother summed up the sentiments of many: "Despite being in inclusion classes since third grade and being quite friendly, he has never had neurotypical friends. Never been invited to a birthday party, never asked on a playdate. Our community talks a lot about inclusion, but the reality is closer to tolerance and often, they are just ignored—they exist alongside, but are not really part of any social groups."

Not a single parent said that their child had friends without disabilities.

It was a reality check, and a sign. Expecting any student to walk into any high school and make new friends can be a tall order; teens are clique-ish, and can be slow to embrace new peers. Expecting a new student with disabilities to be not just accepted by peers at school but be true friends would be damn near impossible, even for a boy as charming as Max.

And speaking of teens are clique-ish: Max wanted to be with his friends at the new school. He was being clique-ish, looking to be with his own kind, like any teen. Who was I to deny that to him?

We chose the private school for students with special needs. Max wasn't particularly excited when I confirmed it, as he assumed all along he'd be going there. He's already guided his grandpa to see it one Saturday morning (Max remembered how to drive there after just one visit). It's not far from where we live, so Dave and I will be able to juggle work and picking Max up from after-school activities. I will have to find other ways for Max to have those integrated experiences, although I'm still not sure how.

The other week, I went to a fundraiser for his chosen school. Some students sang; they sounded pretty good. Then I got to chatting with the mom seated next to me and I stopped paying attention to what was happening onstage. When the lovely background piano music stopped, I looked up to find a student standing up from behind the piano and taking a bow. I had figured a professional was playing.

It was time to stop wishing for what I thought was best for Max, and embrace what truly was.
Ellen Seidman at 6:36 AM