Finding a school for your child with disabilities: What you can learn from our journey 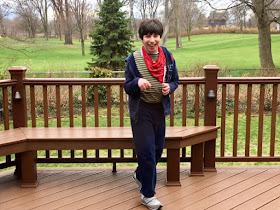 We've decided on the high school Max will attend. It's been quite the process, filled with frustration, disappointment and ultimately, acceptance—much like the journey I've been on raising Max. I'm sharing what happened in a two-part series. Although processes and choices may vary by state, hopefully some of the lessons I learned along the way will help you when the time comes to choosing a school for your child with special needs, be it elementary or high school.

Max has always attended an out-of-district elementary school since our local one was not a good fit. It's a private school for students with disabilities, and he's thrived in it. I wanted to look at the same for high school, as well as integrated programs in public high schools. I thought it would be beneficial for him to be in a school that had students with a range of abilities, to better prepare him for the real world and further his social skills. Max is an extremely social boy, but he's had limited interactions with so-called typical peers.

I've had inclusion on the brain for years. I saw photojournalist Dan Habib's amazing 2007 documentary, Including Samuel, about his family's efforts to include Samuel—their son with cerebral palsy—in school and all aspects of life. I'd held onto a 2004 issue of The New York Times Magazine because of an article, The Lessons of Class 506, about a kindergartner with CP. His father, Richard Ellenson, an advertising executive and visionary, had helped reconfigure a New York City classroom to accommodate Thomas and his wheelchair. (Richard is currently CEO of the Cerebral Palsy Foundation, for whom I write.)

One uphill battle I faced: Some of Max's friends from his current school had gone on to a high school for students with disabilities, and he already had his heart set on that one. It didn't help that at an ice-skating program a couple of months ago, he bumped into Caleb, a former student from school that he was totally obsessed with; Caleb also attends that school. Max grudgingly agreed to check out others.

I started the search last fall. Our district case manager thought that was early and suggested we wait till after winter break to send records and schedule intakes, where the director talks about the school and services and staff members meet with the student to determine if the school can meet his needs. Trust me, you can't start too soon, especially if you're a working parent since you have to carve out time for the visits. We were lucky to have choices, although as it turns out, in the end our choice was pretty much made for us.

Let me back up here: Before you do anything, get an overview of the school search process from your case manager. Ours didn't do that, and I never thought to ask, so I got bits and pieces of information along the way that would have been helpful to collectively know from the get-go.

I knew of several schools to check out. Our case manager, who is lovely and experienced, surprisingly didn't have many suggestions to offer. Sometimes, when I heard of a school that she didn't know of, I'd ask her to ask her colleagues if they had any scoop. Max's school had a couple of suggestions and on occasion I asked for feedback on ones but again, I did not get much direction from them. As the parent, I had to take the lead on figuring out which schools to visit.

A couple of times later on in the process, I randomly found out about potential schools—one from an administrator at Max's school who mentioned it off-handedly in March when I said I was still looking, and one from a mom (a friend of a friend) I happened to sit next to at a charity event. You want to know that you have checked out all possibilities, which is why it's good to know early on who the contenders are.

That leads to me another key to-do: When you start the school search, ask everyone and anyone for suggestions. Hit up your child's teachers, the principal, your child's therapists, parents of children who have already graduated from your child's school, your special needs parent friends in real life and on Facebook—and ask them to ask their friends. You want as full of a list as possible.

After I said I wanted to check out a given school for Max, our case manager would send Max's records there. Then the school would review them and decide whether or not they wanted to meet Max. This was a total shocker to me: Out-of-district schools have the right to turn away your child before even meeting him (more on that in the next part of this series). But is that legal? Yes, it is. If a school decides they cannot accommodate a student's educational needs (I'm not talking about physical accessibility), they can reject your child. Like I said, shocker.

Before you tour any schools, compile a list of questions—in your phone or printed out—to ask. These were my basics:

Obviously, you'll want to tailor the list of questions according to your child's needs. Because Max doesn't have behavioral issues, I wanted to make sure that he wouldn't be in a class with students who had extensive ones and I brought that up. I'd also heard a horror story from a parent about a school revoking her child's physical therapy session without informing her, despite the IEP, and so I made sure to query that school about guaranteeing PT.

As always, trusting my gut helped. At the first school we visited, as teachers and therapists met with Max, the social worker giving me a tour mentioned that the school had a no-homework policy. Surprised, I asked why. She told me that students are often tired at the end of the day and that parents found it stressful. Of course, that's true. Max is often wiped out at night and sometimes resists doing homework. After a long day of work, it's not exactly a pleasure for me, either. But it's very necessary; Max, like many students with special needs, benefits from repetition and review of information, along with plenty of practice.

I felt the school had an institutional feel. There was no student art or projects displayed on the walls, for one. I was impressed with the life skills components, including a woodworking shop and the fact that students sold what they made at craft fairs. Another local mom whose opinion I trusted had chosen the school for her child, which had seemed like a good sign. But still: It didn't feel like the right place for Max, and it wasn't close to our home. Bussing is provided, although picking him up from after-school programming would have been a challenge.

That same school had a sheltered workshop for adults with disabilities, housed in a separate building from the school with dozens of work stations in a large open room. The jobs involved assembling and packing up products. Sheltered workshops are an old-fashioned approach to work for people with intellectual disability, and many are being phased out because they don't always provide meaningful employment and they fail to integrate people with ID into the community. Proponents say they allow people with disability to work in a setting that's comfortable to them.

The kind, elderly woman who had been running the workshop for decades showed Max and me around. A lot of adults said hello to Max, and a few commented on how cute he was. The workers were paid according to the rate at which they worked, which could fall below minimum wage—typical of sheltered workshops, and depressing. One job involved stuffing trinkets into little plastic balls, the kind you win from machines in arcades. Another consisted of packing small boxes into large crates.

I fought back tears. This was not the future I envisioned for Max.

One difficult part of the school search process was coming to terms with my expectations about Max. Fourteen years into raising him, I still project my hopes and dreams onto him. Although it is not possible to know, at this point, how he will function as an adult, I had to come to terms with certain realities. But I could not, would not, picture him in a sheltered workshop. Life will have more to offer my boy.

In the end, the principal told our case manager they felt Max was too high-functioning to attend the school. She said they could handle it academically, but that it wouldn't be good for friendships. Another affirmation: A school that's great for one student isn't guaranteed to fit the needs of your child.

In the fall and early winter, I also visited two schools for students with cerebral palsy, one with Max and one without. I was impressed with the principals, how both schools were run and the therapy programs. Typically, there is less physical, occupational and speech therapy in high school than in elementary school, no matter what kind of IEP your child may have. The CP schools, however, offered extensive therapy (one even had an indoor pool for aquatic therapy); cool activities (a student TV station!); and important services found at Max's current school, including clinics for orthotic fittings and scoliosis assessments. However, I wasn't convinced Max would be sufficiently academically challenged or socially engaged at the schools.

Our case manager had told me early on that basically we'd have to choose between a school with more of a therapy focus and a school with more of an academic focus. I soon discovered how true this was. Still, I was glad to visit as many as I could. It's important to check out a variety of schools—it helps you and your child more firmly decide what you do and don't want.

The hardest, and most heartbreaking, part of our search was yet to come. (Part 2 will be posted next week.)
Ellen Seidman at 6:37 AM