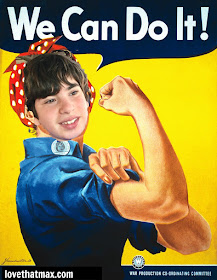 I sat on the couch in our living room and stared at the sentence:

He is unable to use an external mouse due to difficulties dissociating finger movements due to abnormal tone.

The sentence was in the "technological literacy" part of the Present Levels of Academic Achievement and Functional Performance (PLAAFP), the first written statement in an Individualized Education Plan (IEP). While it's true that Max would have challenges using a computer mouse due to dexterity issues, he doesn't use a mouse—and I didn't get why it was being mentioned at all.

True, it was 11:20 at night and I was tired. I'd only received the PLAAFP yesterday morning for today's IEP (#fail) while I was working and I'd spent hours after the kids went to sleep reading through the write-ups, looking at the goals and comparing them to last year's. I had many issues with the document, including the lack of constructive comments and the numerous problems raised that had never been mentioned.

But this sentence in particular got to me. For years now, Max has been using an iPad. He is very adept with it. In fact, Max learned to isolate his pointer finger after the iPad came out because he was so motivated by it (here he is back in June 2010, when he first trialed it). There is a whole world out there of adaptive technology. Why point out what Max can't use?

It's Max who's steered my focus to the can-dos. Ever since he was a little guy, he's never dwelled on his disabilities. He has tried his best, made do, found another way, used an adaptive device or sweet-talked someone into doing it for him. At times, he gets frustrated when someone doesn't understand what he is saying and he won't use his speech app. But mostly, he just does his thing.

When he's biking on his adaptive trike, he's loving that and not pining after the scooters and skateboards other teen boys use. When we eat out, he's not annoyed that he can't cut up and eat a steak; he's digging into his mac 'n cheese. When we're at the pool, he leans over, puts his face in the water and cruises around that way. He doesn't care that he can't swim; he's enjoying the pool in his own way.

This is not, of course, a collective observation about people with disabilities. This is about Max, his temperament and his level of awareness. He's content with who he is. He's raised me, as his parent, to feel the same about him to the point where I don't realize what he hasn't been doing until he does it (like last week, when he tended to his own scraped finger).

He is about the cans, not the can'ts.

We could all take a lesson from Max.

To hell with you, computer mouse.