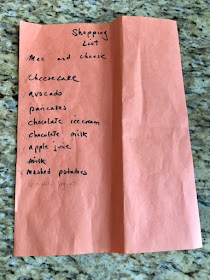 "Max wants to go to the supermarket with me," said his speech therapist. Jeri has been coming to work with Max on Saturday mornings for well over a decade now. She's smart, she knows her stuff and she really cares about Max.

Turns out they had put together a shopping list or, rather, a lis tof Max's food fantasies: mac 'n cheese, cheesecake, avocado, pancakes, chocolate ice-cream, chocolate milk, apple juice, milk and mashed potatoes, a balanced diet if ever there was one. When Max suggested they actually go to the supermarket, Jeri agreed.

I loved that she was doing this with him. As she and other therapists know, tapping into Max's interests during therapy—be it foods or firefighters—is an excellent way to engage him and work on articulation. (Check out this video in which Max's OT got him to put out a fire with a fake hose.)

Therapy is second nature to Max. He has been in one form or another since he was a month old. "Get him as much therapy as possible" a renowned pediatric neurologist told us, and we went all out. We started with physical therapy, then came occupational therapy when he was about six months old and speech therapy a bit later. We also did aquatic therapy (basically, PT in a pool), hippotherapy (horseback riding), craniosacral therapy and hyperbaric oxgyen therapy. If it couldn't hurt and it might help, we've done it. Often, we were able to get the insurance company to reimburse us thanks to staffers who knew the right codes to use and my big mouth.

Although Max doesn't think twice about therapy, he still needs to be actively roped into it. An OT he had for years ran out of ideas and, I found out, spent therapy sessions letting him bike up and down our block. Yes, riding a bike is good exercise but I didn't need to pay someone for that. The OT who followed was so creative. Each session, she'd arrive with a different craft, game or activity—a fire truck to make out of buttons, a shadowbox project, a game that involved manipulating different letter tiles to form words.

Parents of children with disabilities know that everyday life offers plenty of therapeutic opportunities. I bicycled Max's little chubby legs on his changing table, helped him learn to hold a ball with two open hands when we played and encouraged him to reach up to brush his hair, holding his elbow for support. Max needed to learn how to go through all the motions.

The pressure eased up as the years went on. It was part progress—Max would learn to walk, speak words, feed himself, walk up the stairs on his own and dress himself with adaptive clothing—and part acceptance. Max would do what he could do. We guide him as best we can, but we no longer feel like the worst parents in the world when Max is just lounging on the couch and watching TV (although there are certainly leg exercises to do if we want).

We owe the therapists a huge debt of gratitude—all of the school ones who have worked with him over the years, and the private ones who have come to our home. Mindy, who first taught Max how to crawl, guiding one limb forward at a time as she crouched over him on the floor and who eventually enabled Max to walk. Nafeesa, who taught him to hold blocks and pegs. Margie, who always entertained him and made progress with pulling pants up and down. Cristy, who's trying a form of movement therapy with Max that Dave and I are going to be learning in a few weeks. And Jeri, the speech therapist who has been with him since he was little.

Supermarket therapy was especially genius, because Max loves both foods and trips and we'd be ever so thrilled if he said the "p" in pancakes and mashed potatoes. And so, off they went on Saturday morning. Max came back with his stash of foods and a gigantic smile on his face. No "p" this time but maybe the next. 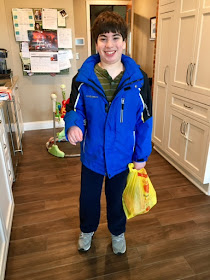