The art of the deal: special needs child version 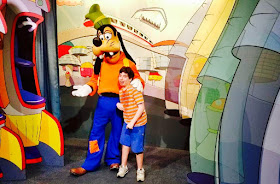 Even before Max arrived home from Disney World on Monday, he was campaigning for the next trip. "June!" he informed Dave, hopefully. "I love Florida!" he said when he called.

I've been explaining ever since that if you don't live in Florida, going to Disney World isn't something you get to do very often, and that it's good he had such an amazing time when he was there.

He hasn't let up about going back.

"Florida is your new home?!" I asked.

"Hmmm.... It would take you a very long time to get back and forth to school, because you'd have to travel on a plane every day," I pointed out. That gave him pause, because he loves his school.

"You want to take Ben to Disney World?" I asked.

This evening, Max came up with a new tactic. While I was in the kitchen getting a snack, he trotted over with his iPad to show me a photo of SeaWorld.

As in, he wasn't asking for Disney World again, so from that point-of-view, his request deserved to be considered.

I noted that we have some cool aquariums near us, along with places where he could go on rides, but: no. "Eeeworl!" said he.

Part of me loves that Max is pushing so hard, because he is learning to advocate for himself. I've long done that for him, but one of my greatest hopes is that Max will learn to stand up for himself.