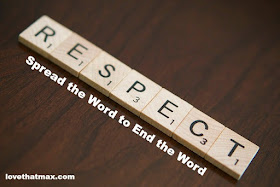 You're not a retard because you messed up.

You're not a loser.

You're not a joke.

You're not a less-than.

I'm not a libtard for expressing my political views.

You get it, right?

Years ago, the terms "mental retardation" and "mentally retarded" were medical terms for people with intellectual disability (ID). Then the words "retard" and "retarded" became insults. They are now considered slurs when they refer to people with ID—and derogatory when they are used as synonyms for people doing stupid stuff, because they perpetuate awful stereotypes. These words demean an entire population of people with intellectual disability. They insult my son Max, a bright, determined, full-of-potential boy who happens to have ID.

All this is why the Special Olympics started a grassroots campaign in 2009 to raise awareness. Today is the ninth annual Spread the Word To End The Word day of awareness.

I think you get it.

Six years ago, I conducted an experiment on Twitter after being alarmed by the voluminous number of people using #retard as a hashtag—thousands a day. Many came from teens. I tweeted at strangers, said I was the mom of a child with disabilities and politely asked them not to use the word. I was largely greeted with ridicule and anger. I wrote about my disheartening experience here. A year later, I made a video, Would You Call My Child A Retard? It still seemed to be some people's favorite word in the history of words.

Yesterday, I searched Twitter to see how often the word "retard" was used within 24 hours. There were about 40 total mentions. The insult du jour is libtard (liberal + retard), yet even then, there were maybe 30 mentions of it. True, a lot of teens have switched from Twitter to Snapchat and Instagram, but there's still an overall major decline in the presence of the word on social media. I've personally heard less people saying it. That's progress.

So here's what we also need to talk about.

Obviously, the word is still out there, online and in conversation. But then, at heart this effort has never been just about a word—it's about raising the bar of respect. It's about not pitying people with intellectual disability, seeing their abilities, accepting them and including them.

If you've quit using the word or asked others to, thank you. Here are some more things you can do: Talk with people who have intellectual disability in a normal, natural way. Don't be afraid of saying the wrong thing; talk and act as you typically do. Speak with your children about those who have special needs. Find ways to involve their peers with ID in activities. In other words, treat adults, teens and kids with special needs like any adults, teens and kids.

30 ways to respect kids and adults with disabilities

How parents can talk to kids about ones with special needs 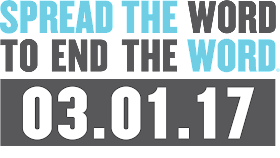