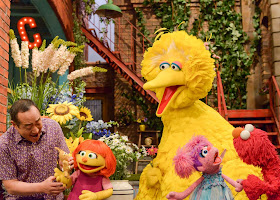 I had two reactions to yesterday's news that Sesame Street will soon introduce a muppet with autism named Julia: That is awesome. Followed by: Hey, what about my child with cerebral palsy? Who's representing him? Perhaps parents of children with Down syndrome had the same response. But the more I thought about it and the more I read, the more I realized that a character on Sesame Street with autism is a win for all children with special needs.

Julia, four years old, began her career in an online animated storybook (part of the Sesame Street and Autism: See Amazing in All Children initiative) before moving on to muppethood. Sesame Workshop consulted with organizations in the autism community to bring her to life. "Meet Julia" will air on Monday, April 10, on PBS KIDS and HBO. The episode features some common scenarios for children with autism: Big Bird says hello to Julia, but she doesn't respond; Julia gets overwhelmed when she hears sirens and covers her ears.

The episode offers simple yet realistic ideas for inclusion, like in this scene where Julia and fellow muppet Abby Cadabby play. After Julia gets so excited that she jumps up and down, the two of them do it together.


When a formative program like Sesame Street exposes young children behavior that's common in children with autism, it can help normalize it. Children with disability remain a rarity in TV programs. "It's important for kids without autism to see what autism can look like," Julia's puppeteer, Stacey Gordon, told Sixty Minutes. She speaks from experience—her son has autism. "Had my son's friends been exposed to his behaviors through something that they had seen on TV before they experienced them in the classroom" she continued, "they might not have been frightened. They might not have been worried when he cried. They would have known that he plays in a different way and that's OK."

Yet as just another cute muppet who hangs with the Sesame Street gang, Julia will also enable children to see how their peers with special needs are similar to them. The more little kids get what's more alike than different, the less they'll view kids with special needs as "others." Sesame Street describes Julia as "smiley, curious and loves to play." You know—your typical muppet next door, who just happens to have autism. She likes to sing, too, and she's bright, showing Abby another way besides blowing to produce bubbles.


Julia will appear in two episodes in the current season and more in the next, according to NPR. I have high hopes that her presence will help young viewers better understand and embrace autism, along with other special needs. Indeed, some of Julia's challenges aren't limited to children with autism. Max had sensory issues for years, and like Julia was afraid of loud noises. Also like children with autism, children with cerebral palsy and Down syndrome can have unique ways of speaking and communicating. These are things parents can point out to their kids, using the skits Julia's in as springboards for larger discussions about children with special needs. Even if they don't, though, Julia will likely leave a lasting impression.

I think of the Street characters I grew up with—curious Big Bird, grouchy Oscar, kooky Ernie and Bert—and how they felt like friends. Perhaps Julia will be one of those characters to the next generation. Sesame Street writer Christine Ferraro said it best: "I would love her to be not Julia, the kid on Sesame Street who has autism. I would like her to be just Julia."

You can watch all six videos featuring Julia here.

How parents can talk to kids about ones with special needs