How hard is it to get around New York City in a wheelchair? Watch this video 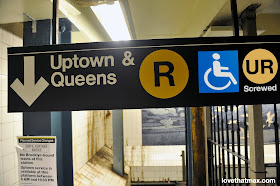 The storied rainbow bagels of Brooklyn, New York, have inspired many a pilgrimage to the borough. In honor of Cerebral Palsy Awareness Month, the Cerebral Palsy Foundation challenged comedian Zach Anner to make the trek via train. Behold, the now-viral video.


Because he's Zach, the video's amusing (that moment with the "Statue of Liberty"!!!) but at heart, it's sobering. It doesn't seem like much progress has been made in subway accessibility since the 2013 short documentary The Long Wait by filmmaker Jason DaSilva, which shed light on challenges he faced getting around New York as a person with disability. In 2015, mass transit enthusiast Matthew Ahn posted a revised Metropolitan Transit Authority Map on his blog that only showed accessible stops. The map was shockingly sparse; of the 490 train stations in the New York subway system, not even 100 are accessible, he noted.

And now? Wikipedia points to a total of 122 stations in New York, as of this writing, that are compliant with the Americans with Disabilities Act (ADA). Yet more troubling is the fact that New York is considered one of the most accessible cities in the country, despite its shortcomings.

New York has invested a kajillion dollars in a new subway extension on the Upper East Side. Although weekly and monthly MetroCard fares just went up, whether that money will go toward making ancient stations accessible is dubious. Other fare hikes have come before, yet enabling people with disability to use our city's trains has not been a priority. At least Zach and CPF are raising awareness about what it's like to travel around a city on wheels...or not.