He did it his way: Introducing skitting 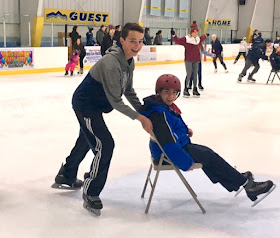 Sunday afternoon, I took Max to an ice-skating event. Youth from a local ice-hockey team had volunteered to partner with ones who have disabilities, thanks to the amazing SNAP Athletic Programs. I figured Max would push around a walker, which is what he's done in the past. But he surprised me.

The coordinator paired Max up with two super-nice boys, Christian and Tyler. We quickly realized that Max was kind of tall for a walker. But he wanted to try. He ventured out onto the ice on his sneakers and cruised around, with the boys hovering nearby. 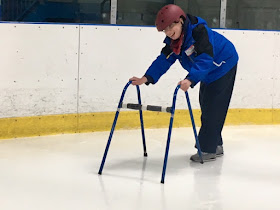 Max has never worn ice-skates—his walking is pretty good but he's not always sturdy with balance so we've never gone there. Oh, but after a few minutes Max decided to. "Skates!" he announced, pointing to his feet. And so, off we went to get skates; a dad helped us lace them up. Max walked over to the rink pretty well. As soon as he stepped onto the ice, though, his legs gave out. Two moms standing nearby helped prop him up. That's when I suggested someone find a chair and zoom him around.

Max was giddy-happy as the boys whizzed him over the ice. They took turns for well over an hour, roping in another boy whose name I didn't catch. Max, meanwhile, held on well. A few times, he held hands with a couple of friends he knew from school and activities and they skitted together. 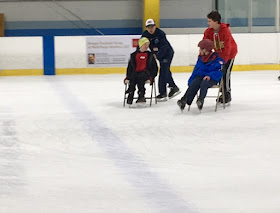 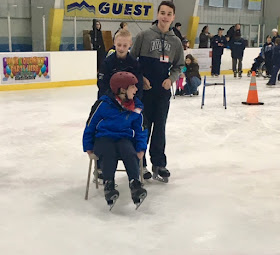 Sometimes when I go to events where there will be a bunch of boys around Max's age, I wonder if I'll feel any pangs of would-he-have-been-like-them. I didn't have a single one. I was proud of Max for trying skates. I was impressed that he kept his feet raised as his chair glided over the ice. I was grateful to the boys for lending him a hand. And I was glad they all had a fun time. 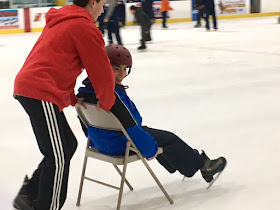