The 2017 Oscars fail and people's fixation with flubs 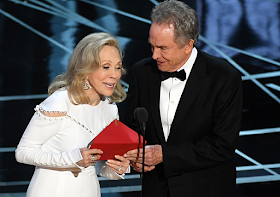 Two days after the wrong Best Picture was mistakenly announced at the 2017 Oscars, my news feed remains filled with articles deconstructing what happened. Like everyone, I was eager to know what had gone wrong. But the more I thought about it, the more uncomfortable I got with the all the attention the mess-up received. Because our collective obsession with so-called imperfection regularly victimizes Max and others with disability.

Dave was snoring away on the couch when Oscargate occurred. In the first few seconds, I thought it was a Jimmy Kimmel prank but as quickly became clear, this was no joke. The gaff would have made major headlines no matter what. But perhaps a lot of us were more vested in the Oscars this season because we needed entertainment as usual, given the political unrest. What happened Sunday night was unprecedented.

Social media pounced, and some reactions were pretty amusing: 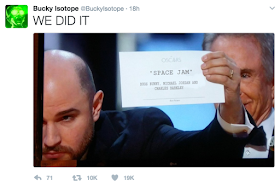 (For the record: the montage actually did contain a photo of someone living, as The Washington Post and others reported).

The hoopla started getting to me as I watched Good Morning America's Lara Spencer interview the cast of Moonlight and question them about what went through their heads when the mistake went down. A few minutes later she finally acknowledged what a beautiful film it is, but the segment was over soon afterward. Next I saw someone interviewing Emma Stone, and again, the discussion centered around the mistake rather than her big-time win. And so on and so on. All anyone could see was what was wrong, not what was right.

Obviously, it was a colossal mistake, made all the more juicy because it happened on live TV. But the attention it's received has been over the top. I keep thinking about that because it ties in to something that I've noticed while raising Max: Often people can only see what they perceive as wrong, not what's right.

If you asked people who don't know Max well to describe him, they would likely identify him as a child with special needs or cerebral palsy. They might note that he has issues speaking. This is true. Yet these are not his defining characteristics—they are just part of who he is. If you ask people at, say, Max's school to describe him, they would likely mention his sunny personality and big smile. If you ask me, I'd say the same and also point out that he's bright, super-social and handsome, too. (Yeah, I'm his mother.)

Over the years, strangers have commented to me and Dave what amazing parents we are—without even knowing us—because we have a child with disabilities. People have nodded sympathetically and stared at me with mournful eyes because of Max. They think that we have an unfortunate situation when the truth is that we love Max not because we're saints but because he is our child and he is an awesome one, at that. We're lucky to have him, just as he's lucky to have us.

No entity or person deserves to be defined by defects, real or perceived. This year's Oscar winners have been overshadowed by that one mistake, and it seems like the 2017 Academy Awards will be mainly remembered for it. I doubt that any cultural self-reflection about our hyper-focus on perfection or lack thereof will ensue. But if you've read this, maybe I've given you new perspective on disability. And maybe as our society's thinking about those with disability continues to evolve, people will view Max and others like him as the fully-formed people that they are.
Ellen Seidman at 6:39 AM