That time my baby brother came to my basketball game 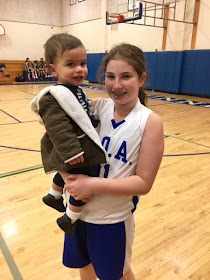 This guest post is by Sabrina. I only had to pay her $5.

One of the best advantages of having a baby brother is that you get all the attention. I've been begging my mom to take him to a game and it happened yesterday! During the basketball game, a lot of people on my team kept giving me compliments about how cute he was. I was very flattered. He really is cute. I kiss him a lot every day.

Ben was making cute noises that sounded like "aaaaaaaaah!" Every time it was quiet in the gym, Ben was having his own conversation.

I was a little nervous because if you know my mom she takes videos of everything and it's a little embarrassing, but at the end I made a shot.

The thing that I was most excited for was after the game because then I could show the baby to everyone. Of course I wasn't shoving him in their faces, I was just walking around with him, but when he started making adorable noises I had to show people. I have been waiting for my mom to bring Ben, so I was really happy.

I really love having Ben as my brother. Whether he's crying or laughing he always makes my day a whole lot better. Just the look of him makes me want to smoosh him up.
Ellen Seidman at 6:38 AM