How do you get yourself out of those anxiety black holes? 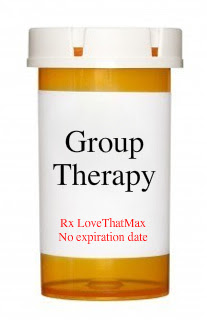 I lost it over a door handle the other evening. Sabrina had a few friends visiting this weekend and somehow, they broke the lever to the basement door. First I couldn't remove it. Then I realized part of it was warped. I hammered it out, but another part stumped me.

The baby is all over the place, so we need a basement door that locks. Also: It. Was. One. More. Thing. To. Deal. With.

Poor Max did not want any part of it. He opened the front door and went onto the porch. Dave tried to calm me but I was determined to fix the damn door handle. (I'm more handy than Dave is, which he'll be the first to admit.) After I spent an hour trying to install two teeny tiny screw with an Allen wrench, though, I had to admit defeat.

Dave thought I was being completely irrational, and he was right. Still, my reaction wasn't really about the door handle. Is it ever really about that one thing? I went off the deep end because I've been anxious about deciding on a high school for Max. The process has not been smooth. Although I've tried to find an inclusive program, it doesn't seem to be working out. (More on that another time.) The concern I feel about the big changes happening in our country are also feeding into my stress.

Sometimes, my anxiety about Max has a way of seeping into other parts of my life. A couple of weeks ago, I pretty much convinced myself that our home's foundation was sinking. First I spotted a gigantic crack on baseboard molding in the living room. Then I started noticing other cracks—by a window on the second floor, on baseboard molding in our bedroom. Oh, and the attic door was no longer closing. This was all on our home's right side; it's the addition part of our house, which dates back to 1922. We'd had construction done in the kitchen before the baby was born—could that have set the house askew?!

I had to admit, the anxiety I've been carrying around has caused cracks in my foundation.

Taking Ben for long walks in his stroller and talking with friends helps. So does taking action steps. I have a contractor coming in Thursday to eyeball stuff. I've called senators to oppose Betsy DeVos, and I've been figuring out what I can do for Max. He goes to an inclusionary camp during the summer. I'm going to see if I can find another activity in our area that's inclusive. Or maybe I can pair Max up with a peer his age to help encourage friendship. Or...I don't know. Yet.

Ironically, the other thing that helps me cope with anxiety is—wait for it—doing home repairs. Getting into the zone of fixing broken stuff is a good distraction. It's satisfying when there is stuff in Max's life and stuff in the world at large that I cannot fix.

Dave got a new door lever from Home Depot and I easily installed it. Turns out I had accidentally removed two screws that weren't supposed to be removed.

How do you handle those times when anxiety gets the best of you? 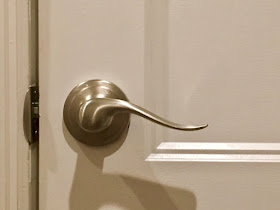