The better part of the worst 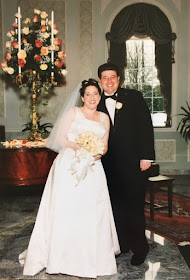 Saturday, Dave and I celebrated our 16th anniversary. We went to a friend's party at night, and I got into a conversation with some women there about childcare. I boasted about Dave, who has always and unhesitatingly changed diapers and fed the kids. What I couldn't get into with a group of strangers is just how amazing he's always been with Max, from day one.

Nobody ever really ponders the "for worse" part of your wedding vows. I mean, who knows what the future holds? You assume that the wonderful person you fell in love with will always be there for you. You think he or she will be a great parent. You certainly never imagine that your firstborn will have a stroke at birth and end up with cerebral palsy. You never imagine you will have a child with special needs.

As much of an optimist and can-do person as I'd always been, I was mired in grief. I felt sad about what had happened to my baby, worried sick about his future and devastated for Dave and me. Dave grew less despondent as weeks passed. Not me. I cried in the shower, when I drove Max to therapy and sometimes as I breastfed him. One night, I lay in bed and sobbed. "This is my worst nightmare," I blurted. And Dave, who was standing beside me holding Max, said, "Honey, look at him, does he look like a nightmare? He's beautiful."

That was Dave, forcing me to appreciate the present instead of dwelling on the past and freaking out about the future.

He'd sing silly songs ("Max makes big DOOODIES!"). He'd get Chinese food for dinner and spoon-feed it to me as I sat on the couch and nursed Max. He'd cuddle Max and tell him that he was going to grow up and be great.

I couldn't have ever known this would be the "for better" of the "for worst."

That first year with Max was the hardest one of my life as I struggled to accept what had happened, organized Max's therapies, did the exercises with him, took him to specialists and tried to not obsess about all the milestones he was missing. Through it all, Dave stayed steady and strong.

Back then, Dave had more flexibility in his job than I did. When we decided to get Max hyperbaric oxygen treatment, Dave would leave work early for sessions (we did around 40). He'd lie with Max in a glass tube as a technician infused the chamber with oxygen, in hopes of sparking dormant parts of the brain surrounding the damaged areas.

I couldn't have known this would be the "for better" of the "for worst."

When Max woke up with seizures on three different occasions, and his body convulsed uncontrollably with his eyes rolled up in his head and we called 911 and we watched helplessly and it seemed like death itself was hovering over our boy, Dave and I clung to each other. For weeks, I was haunted by what happened. "The medication will help," Dave would remind me, hugging me tight. "He will be fine."

Of course, Max turned out to be the best, not the worst: a cheerful, loving, determined, seriously cute boy. To know him was to adore him.

As Max got older, he and Dave started going on boys' days out. It began with trying new restaurants. Then they went on road trips—to an uncle in Rhode Island, to Diggerland USA. They took train rides to nowhere, just for fun. They'd roam around New York City and recently walked across the Brooklyn Bridge. They visited Chicago, especially because Max wanted to see the fire trucks there. This spring, they are going on a long weekend to Disney World along with Dave's dad.

When Max was a baby, I'd get sad when I looked at our glowing, happy faces in the wedding photos. We had no idea what would happen, I'd think. But now, I look at those photos and I think how lucky I am.
Ellen Seidman at 6:37 AM