It's not nice to make fun of Donald Trump, Max says 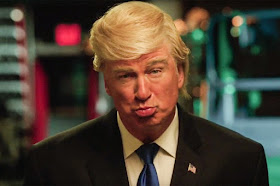 "He's funny!" says Max. My iPhone is open to CNN, which has a photo of Donald Trump.

"Max, the guy in the show that you and Daddy watch is not Donald Trump—he's an actor." I'm talking about Saturday Night Live's skits with Alec Baldwin. Max thinks they're hysterical, especially when Baldwin enunciates "jina."

Max ponders that. We've had this conversation a bunch of times. He is convinced that Donald Trump and Alec Baldwin are one and the same. Every single time Max sees a photo of Donald Trump or I mention him, he says, "He's funny!"

This is how Max's brain works. It sometimes takes him a while to wrap his mind around a concept.

I look up a photo of Alec Baldwin online and show it to Max.

"Alec Baldwin is the actor who plays Donald Trump on the show," I explain.

"Yes, actor—someone who is in shows on TV and in movies," I say.

When I open a Saturday Night Live Trump skit on YouTube, Max says, "It's Donald Trump!"

My patience has drastically increased since having children.

We watch a skit of one of the Clinton/Trump debates. "On this TV program, sometimes they make fun of people," I tell him.

Ah. How do I explain impersonation? Satire?

Meanwhile, Max has got me thinking about making fun of people and the current climate (and I am not referring to global warming). There's the time Trump seemingly imitated a reporter with a physical disability. But I am also thinking of how people regularly mock Trump's appearance—his hair, his coloring, his hands. Ashley Judd's "nasty woman" speech at the D.C. Women's March was powerful enough; she didn't need to refer to Trump as someone who bathes in Cheetos dust.

It's not that I feel badly for him. Hardly. He's a big boy with a big ego. You open yourself up to that level of scrutiny and ridicule when you're a public figure, especially a divisive one. But in making comments about Trump's appearance, people aren't just going low—they're diverting attention away from the real issues at hand.

Max isn't aware of all the social media chatter. All he knows is that he finds Alec Baldwin's exaggerated gestures and speech amusing. Me, too.

Maybe it's not the best explanation, but it's all I've got.