If only everyone saw him like his baby brother does 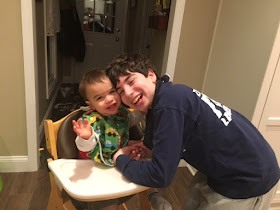 The baby wakes up first in our house, followed by Max, who goes into his room. As I'm lying in bed, half asleep, I hear Max making noises and Ben laughing. It is one of the best sounds I've ever heard.

The kids each have their own special relationship with Ben. He always has a squeal for Sabrina when she walks in the door at the end of the day, and loves to be held by her—so much so that sometimes he'll cling to her and refuse to come to me. Lately, she walks around the house with him as he toddles like Frankenstein, clutching her finger.

Ben likes to poke at Max's face—his nose, his cheeks, his eyes, his hair—and Max gladly tolerates it. Max is really great at picking up stuff Ben drops off his high chair, which happens approximately every 3.5 seconds. Lately, he is trying to teach him to talk. "Say 'thank you!'" Max requested the other day, after I gave Ben lunch. Ben just grinned.

Sometimes, Max and I stand there and laugh delightedly at Ben, who has taken to saying "Yeah!" when you ask him a question. It's his only word, and it is far better than "No!" We are pretty sure Ben doesn't know exactly what's being asked, but he does get that when you hear a question, you give a response.

Oh, and the kisses: When Max leans over to Ben in his high chair, Ben will open his mouth and plant his lips on Max's cheek. I could keel over from the cuteness.

Ben doesn't think that his big brother talks funny or acts different. He doesn't feel sorry for him. He'll grow up thinking that he's just Max. Sure, there will be questions down the road but his concept of Max will not change: that he is a cheerful, big-hearted, animated guy with an infectious giggle. Who fights with him over his fire trucks.

Sometimes, when I watch Ben gaze adoringly at Max, I wish that more people could see Max for who he is, instead of mainly seeing his disability. 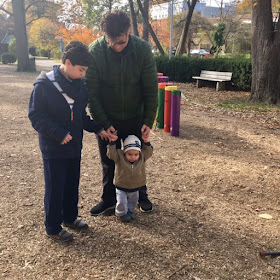