When he walked across a bridge and I was in awe 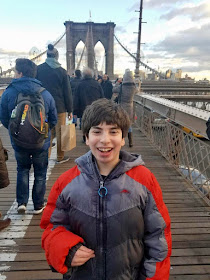 I stared at the picture on my phone, wondering if I was seeing what I thought I was seeing: Was that Max standing on the walkway of the Brooklyn Bridge? Dave had just texted it to me. He and Max had gone off on one of their adventures in New York City this weekend. "Did he actually walk across the bridge?" I wrote back. "The whole bridge," Dave reported. And now, they were eating pizza at Grimaldi's in Brooklyn.

I couldn't think of a more perfect way to celebrate Max's 14th birthday this Saturday, and all the steps forward he has taken. Oh, yes, fourteen. Trust me, I can't believe it, either. I still think he's plenty cute, but he is growing up fast.

I immediately Googled to see how long the walkway is. Dave and I had walked it years ago, after 9/11, when we felt compelled to do something that was a classic New York activity. Wow: 1.1 miles, and Max had made it. His leg muscles get fatigued faster than other teens' do because he has to work harder to use them.

Once again, I thought: If only those NICU doctors could see him now. I also thought: If only I could have known in 2002 that the baby lying unconscious in the incubator would someday be able to walk the span of a bridge.

I had never even heard of a baby having a stroke. The list of everything that could be wrong with Max—not walking, not talking, cognitive impairment, speech and hearing issues—left me little hope for his future. It wasn't until I first saw him smile, at three months old, that I felt a glimmer of it.

The hope would build, even as Max lagged behind in milestones, once I found a great team of therapists for him, understood the importance of inchstones, re-envisioned what it meant to have a child with disabilities, and basked in the warmth of Max's personality. He was sunny from the start.

I thought, after Max's birth, that his life and mine were ruined. And now, this is my Max: a boy who loves roaming around the big city with his dad, exploring and eating lots of crappy food. A boy whose dad truly enjoys his company. A boy who is game to walk across an entire bridge. A boy who, like any of us, has his strengths and weaknesses. Walking: strength. Talking and using his hands: not so much, but improving.

I gazed at the photo on my phone, and felt an intense mix of relief and happiness—feelings I could never have imagined having fourteen years ago. And I felt lucky, so lucky.
Ellen Seidman at 6:36 AM