How to annoy your kids and influence people 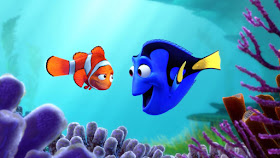 Party at our house! I don't get to say that very often these days. But Dave's away on business, my sister came over on Saturday with her cutie-pie daughter Margo, and we had movie-and-ice-cream night.

We watched Finding Dory, then gorged on chocolate ice-cream (Max) and vanilla chocolate-chip (the rest of us) with hot fudge, caramel sauce and sprinkles.

"Hiiiiiiiii, Maaaaaa-aaaaax," I said in my best Dory-talking-whale voice as I stood at the sink, washing dishes. In the movie, Dory speaks whale because she has one as a friend.

"Hiiiiiiiii, Sabrinaaaaaaaaaa," I said in my Dory-whale voice. Lately, she's a tough cookie but she also giggled. Win!

So then, I kept talking like Whale Dory and Max kept laughing. Oddly, everyone else wandered away.

"It's not funny anymore?" I asked.

But then, I was having too much fun.

And on I went, gleefully. My kids annoy me plenty. Max had been watching fire truck videos for a good chunk of the morning, refusing to turn down the volume. He'd also been repeating the same sentence for the better part of the day: "I want to go to Disney!" Why couldn't I be the irksome one for once? It felt kind of good.

In fact, I am going to regularly talk like Whale Dory from now on, and try to come up with other way to annoy my children! Maybe I will even start whining about being bored, crying when I do not win the war of the TV remote control, and pout when I don't feel like clearing the table.

This seems like excellent parent therapy. Think of the potential!