Who is this boy? 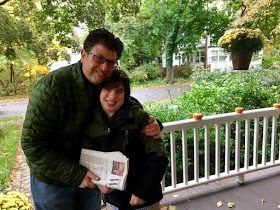 Dave and Max went on a New York City adventure this weekend. It was Max's idea, and he's been talking about it for weeks.

The day went just as he'd planned: He and Dave showered, dressed in nice clothes and put gel in their hair. Then they took the train to New York. Max had it in his head that they needed to rush to the train; that's what he assumes you need to do when one takes a train, because I make a mad dash out of the house on the mornings when I work in an office.

They took the subway to the Museum of Natural History, because Max wanted to see the dinosaurs. He saw them, he watched a movie about them and he was done. Next up, they had lunch downtown. Eating good food was the main objective of the day for both of them, I am pretty sure.

They found a Jamaican restaurant. Max ate his body weight in mac 'n cheese, Dave had saltfish. Next, they walked to a firehouse. Then they had fancy ice-cream. Then they found a hibatchi restaurant; Max loves watching chefs cook on a table.

I kept keeping text and phone updates about what they were up to. Every time I heard Max say "Hi, Mommy!" gleefully, I felt the same.

This is the kid who used to be afraid to go to museums, events, concerts, restaurants or basically anywhere new. The noise and crowds were overwhelming and scary. Headphones helped, but often Max didn't want to stay. If we'd go to a new restaurant, he was likely to run out, screeching, and either Dave or I would hang in the entryway or outside with him and the other one of us with Sabrina.

For years, we went to this one diner near our home that Max finally grew accustomed to. We could only sit at a table way in the back, near the bathroom. It was always free because nobody else wanted it, except this one time we arrived for dinner and some guy was at "Max's" table. Max got upset and the waitress took pity on us and asked the man if he'd mind moving.

When this is your family history, you don't take outings for granted. Dave and I are both so awe of this boy who not just traipses so intrepidly around the city with his dad but is so curious about the world around him.

"Where are you going today?" he asks me every morning.

"Where are we going today?" he asks on weekends.

When Max was a baby, our neurologist told us to expose him to as much as possible to help his mind grow. Now, the possibilities seem endless.

He'd like to go back to New York in two weeks, please.
Ellen Seidman at 6:35 AM