That time he tried to get me arrested 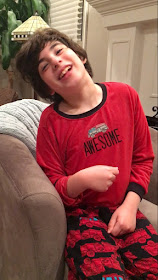 Yesterday was the Day of Atonement, the holiest day of the Jewish year. Max happened to wake up in one of his contrarian moods. It happens to all of us, right? Typically, though, police offers are not involved.

Max had stormed around the kitchen in the morning, upset that we were tending to the baby (it was Ben's birthday) and not helping him get dressed right that second. En route to the temple, he was calm and we practiced saying "Yom Kippur" (articulating consonants is still a work in progress).

Max and I were the only attendees at the inclusive service. It's a relatively new initiative and next year, as the educator running it and I agreed, we'll make a concerted effort to spread the word. She was open to letting Max lead the way. Well, Contrarian Fireman Max didn't want to say that blessing. Or that one. Or that one.

Max did recite his favorite, The Shemah, the usual proud smile on his face. He listened as the leader and I sang a few songs. He didn't want to hear a story, but agreed to play a Velcro-ball toss, trying to land it on numbers on a mat. The point she wanted to show: Sometimes we're perfect, sometimes we're not, as Contrarian Fireman Max was demonstrating. But at least he was there and participating, and I was glad for that.

Soon enough, Contrarian Fireman Max decided that I was the one acting not perfectly. Because when he walked out of the chapel at the end of the service before it was done, I informed him that it was rude to leave. I thanked the woman who lead it, and told Max that sort of behavior was not OK.

And then we were in a downward behavior spiral. Max stood in the lobby and made huffy mad noises. He walked outside and told me he wanted to leave.

I said "No, we're here this morning because of Yom Kippur, and Daddy, Sabrina and Ben are coming soon."

He stomped his feet and made more huffy mad noises.

"NO!" yelled Contrarian Fireman Max. "You're not nice!"

I didn't have it in me to deal. It's rare that Max acts up this way, and usually he chills out pretty quickly. But I was fasting and had a caffeine-withdrawal headache and besides, it was a day when I wanted to be at peace and reflective. That wasn't happening.

Then Max spotted a sheriff who was stationed near the temple for security. He dashed up to him.

Evidently, on this Day of Atonement, he thought I was in need of not just repentance but reckoning, too.

The sheriff looked at me, unsure of what Max had just said. It sounded like "Eee aaaahh!"

"He wants you to know that I'm bad," said I, his trusty translator.

"He's mad because I've been telling him not to misbehave," I explained.

He did all of this with a huge grin on his face, so clearly he knew I wasn't actually going to get arrested. (Or at least, I am choosing to think that.)

"He'd like me to go sit in the police car," I told the sheriff, who appeared to be on the verge of laughing.

Max looked at the sheriff expectantly.

"Perhaps you can remind him how important it is for children to not yell at their mothers and to listen to them," I suggested.

"Max, your mother is right, it is not good to yell and you should always listen to your mother because she knows best," he said.

Max looked disappointed. He turned on his heels and walked back to the lobby.

Back at home, Max returned to his usual pleasant Fireman Max self.

Evidently, this alert-the-authorities approach by children perturbed their parents is not unheard of. When I told a speech therapist who's a friend about what happened, she told me about the time a child with Down syndrome called 911—because his mother yelled at him.

At bedtime, as I was videotaping Max talking (it helps him better perceive how he sounds when he speaks), I brought up his behavior.

For a few seconds, Contrarian Fireman Max reared his head—and he knew it. Then he gave me his usual sweet kiss good night.