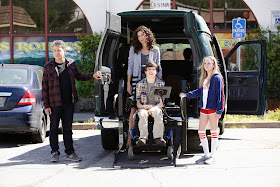 A fire truck whizzed by as I drove Max to an occupational therapy appointment yesterday afternoon. "Where's it going?" Max asked. "I'm not sure!" I said, but that wasn't true: I knew it was headed to our street. A tree had just fallen, downed a power line and knocked out the electricity. If Max had a clue the fire truck was by our house, though, he would have insisted I turn the car around and buh-bye therapy. These are the perils of raising a wannabe firefighter.

Suddenly, I was having a crisis. Should I pull Max out of therapy and go home? I mean, it's not every day that a ladder fire truck—your child's favorite one, no less—is sitting outside your house. But, bad mom that I am, I let Max finish the session. He squealed when we got to our street and saw the fire truck.

Max couldn't have looked any happier at the scene of the emergency. He had me snap photo after photo as concerned neighbors hovered nearby, discussing the damage and when our power would be restored. 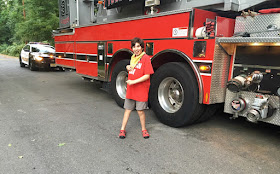 Next, Max dashed over to the firefighters. "Hi, Max!" they said. "We didn't know you lived here!" Because of course, they knew him. He posed for more pictures.

"Fireman Max, you need to come inside and do your homework," I finally told him.

Sometimes, the situations I find myself in with Max are straight out of a sitcom. I'm sure there are plenty of special needs parents who feel the same. And now, there's a sitcom that's laughing (and calling b.s. and taking a stand) right along with us: ABC's Speechless. It's the first TV comedy to depict life with cerebral palsy. People will be getting yet more insights into CP thanks to the show's partnership with the Cerebral Palsy Foundation (CPF). Speechless premieres next Wednesday, September 21, at 8:30/7:30c. I'm hoping it's a game-changer for Max, others with CP and the disability population as a whole.

The show stars Minnie Driver as Maya DiMeo, a mom of three. Her oldest, JJ, (Micah Fowler) has cerebral palsy, and Maya stops at nothing to get him the help he needs. There are many relatable moments throughout the first episode, which had me laughing. People gaping at her son: Oh, yah, I know all about that. People acting awkwardly because they're not sure how to behave around someone with disability: Yah, I know about that too. People surprised that JJ deserves to be treated like any other young man: Oh, yah, #beenthere.


As the mom of a teen with cerebral palsy, I'm grateful to see a teen with CP (played by an actor with CP!) presented in such a real way, with none of that dippy, pity-filled, TV "After School Special-ness," as producer Scott Silveri told the L.A. Times. "At its core it's a show about being different and not apologizing for being different and embracing who you are."

One of the reasons Speechless is so true to life is because it is informed by people with disability and their family members. Silveri, who produced Friends, has a brother with cerebral palsy. Experts from the Cerebral Palsy Foundation and CEO Richard Ellenson—dad to Thomas, a 19-year-old with CP—are providing guidance. And then of course there's Micah, who emailed me yesterday. He's helped writers with technical details, like how he operates a wheelchair, and shared stories about growing up that have been used in the show.

I'd asked if he particularly related to any scene in the first episode. He mentioned the one in which Maya gets outraged that the only ramp into JJ's school is one used to transport garbage: "The scene actually happened, just as you see it in the pilot! My mom was trying to get me in the front door of the school and my powered chair couldn't make it over the lip of the door jamb. My mom was all frustrated and was complaining about the situation to the door monitor. She asked, 'Who do I need to talk to about this to get it fixed?' The door monitor quietly pointed to this man behind me, in a suit, who had seen the whole thing. Turned out it was the superintendent of the school district! He was all apologetic and by the next week they'd built up the entryway so I could roll smoothly into school! The school district was awesome, very accommodating, and took care of it right away."

Richard Ellenson has his own material to offer based on raising Thomas. Recently, he put together notes for Speechless about dating and people with disabilities. "I was thinking of an interview CPF had done just that day with a fantastic twentysomething guy with dysarthric speech and a twentysomething woman who had difficulty walking," he says. "The stream of insights that the Foundation has gathered allows us to help the writers wend their way through these incredibly complex issues. But I was also literally carrying on a conversation with my son, who was using his iPad, to tell me about a girl he liked and trying to figure out whether he had a chance or not."

One big hope Micah has expressed for Speechless: that it helps people get to know JJ as a "very normal" person (disability? What disability?), and that it brings awareness. He is all too familiar with the fact that many people don't understand what CP is. "Not very long ago, I had a substitute aide for a day," he recalls. "She was a pretty good looking young lady and as we got into the elevator she asked me, 'Micah do you need me to help you clean out out you colostomy bag?' I was like, 'I don't have one of those...but thanks anyway!'"

As part of its partnership with Speechless, CPF will post related content immediately after episodes end. "Laughter makes it OK to talk about cerebral palsy," says Richard. "Speechless will get the conversation going, and the Foundation will give the information to have a conversation about the more detailed aspects." Following the first episode, CPF will present an overview of CP; subsequent weeks will address augmentative communication and inclusion. The Foundation will also be introducing audiences to a diverse range of families, as each one of ours is its own awesome (and challenged and on occasion, bonkers). You can sign up for the content here. (This collaboration is one of several innovative and impactful CPF programs, including the Women's Health Initiative, Design for Disabilities and Kinect).

I'm psyched to watch the show with Max. There are sure to be teachable moments, like JJ's version of giving the finger (a life skill not usually covered by OTs). Oh, man, I have so many ideas for episodes. See: As Maya waits on endless hold with the insurance company, she decides to drive over to their offices and confront them! See: Maya asks for an extra speech therapy session during the IEP meeting; when she is told her son doesn't need that, she opens a door and her team of experts and advocates attacks! See: A youth program refuses to accommodate JJ and Maya goes all social media on them until they beg forgiveness and kiss up to him!

See: Max goes to sleep asking if another tree could fall down tomorrow so the fire truck will return! Oh, wait: That's my actual life. 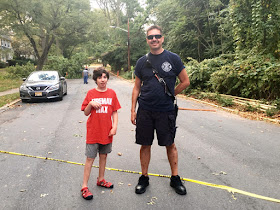