The mystery of the stuff that's disappeared in our house 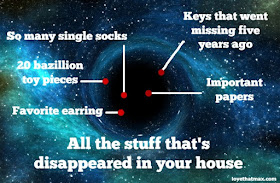 I was pretty sure nobody had broken into our house and stolen my tweezers. But where were they? As I finally got around to tending to my brows the other night, my trusty Tweezermans were not in their usual spot in the medicine chest.

I have been known to leave my cell phone in the fridge and my wallet in the car trunk, but my tweezers always stay in the bathroom. I looked everywhere. Nope: Not beneath the sink, not in our bedroom, not in Ben's room. Sabrina hadn't used them for some craft project. Dave hadn't used them for who knows what.

Weirdly, this was the second pair that had disappeared in the last year. And it was highly unlikely that both had been snatched by some crook in dire need of a good brow plucking.

Our house is hardly tremendous, which makes all the stuff that gets lost in it even more perplexing. A couple of months ago, I ordered some extra boxes of contact lenses online; they are nowhere to be found. I spent close to an hour this summer searching for two tubes of organic sunscreen I'd bought for the kids. Gone. Random gift cards I know I never used: gone. My orange leather business card holder, a tote bag, a cute white blouse, my high-school yearbook, our stepladder, the pint of white paint for touching up trim, the kit for hanging framed pictures, a Post-it with notes from an important doctor appointment which is what I get for writing them on a Post-it: gone, gone, gone.

The caboose part of Ben's favorite toy train is missing, along with a bazillion tiny toy pieces plus the white ladder that goes of one of Max's fire trucks. My favorite screwdriver (yes, I have a favorite screwdriver) has been AWOL for a couple of years now. Gifts I bought ahead of time for people then stored them: Where are you?!

Also: Someone in our house eats pens. Which is the only logical conclusion I can come to, given the fact that whenever I'm on the phone and need to jot something down, there is no pen anywhere.

I am a pretty organized person. I grew up with a loving father who happened to be a hoarder, one reason why my happy place is one in which stuff is neatly arranged—and there. When something goes missing, I feel unhinged, as if I am slowly but surely losing my mind. That feeling is compounded by the fact that when I'm looking around for whatever it is that's lost, I tend to mutter to myself, tug at my hair and occasionally wail "Where is it?"

And I am always the one in our family trying to track down lost objects, because nobody else ever seems all that concerned, although when my eyebrows get out of control everyone's gonna be very sorry. I assume, too, that if something major went missing—say, the coffee machine or our back deck—someone might help me find them.

I don't think anyone is playing a joke on me.

I am pretty sure there is no government conspiracy involved.

I do not believe in the supernatural or ghosts, who typically do not require brow maintenance, although there are online tutorials on using your psychic powers to find lost items. ("Start walking around the area where you think you probably lost your precious item and try to feel a tug in your midsection pulling you in the direction of your lost item. Or you might feel a hot or cold sensation telling you if you're near or far, respectively. You might feel a tingling sensation in your hands when you get close. Don't use your logic. Feel the tugging, temperature or tingle.")

On my list of stuff I wish would get lost: the cardboard box fire truck that has been gathering dust in Max's room, Sabrina's selfie stick, Ben's toy that makes obnoxiously loud animal sounds, all of the underwear with holes and Donald Trump.

I recently went through some of the kids' artwork and homework that I'd stored in our attic. When I opened up one folder, in between drawings of flowers and purple circles I found a pile of bills...dated 2013. Too bad my tweezers were not there, or any of that other stuff.

On the upside: I have yet to lose any of my children in the house. I know the precise location of the box of fancy paper straws and our stockpile of chocolate pudding cups, but if I told you I'd have to kill you. Heck, I even know what's in those two blue bins tucked up in the rafters of the garage (Girl Scout sit-upons and, um, I'll get back to you).

In other news: Have you seen my tweezers?
Ellen Seidman at 6:37 AM