Raising children with special needs: One more step toward independence 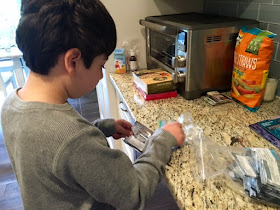 For a while now, Max has been making sure that new foods he eats are allergen-free. “Uts?” he’ll ask (“Nuts?”), whether it’s a food at a restaurant or some exotic fruit.

That’s been really satisfying. After years of care being a one-way street, it is heartening to see Max fending for himself. He still a ways to go; his fine-motor skills can get in the way of what he’d like to do, and we continue to figure out work-arounds. But there's been yet more progress recently.

As Max was packing for a trip, he went to the cabinet where we keep his anti-seizure meds and matter-of-factly started pulling out packets of the powder (it's compounded).

He nodded, and I handed him one. I felt downright giddy that Max understands how important his medicine is. He never did recall having a seizure last year, but gets that he needs meds to keep him healthy. That, we've talked about with him. But there he was, assuming responsibility of his own accord. That's the thing about independence, as with other milestones: You can teach it, you can encourage it, you can send prayers to the developmental gods, but ultimately it has to come from your child.

Max proceeded to stuff the bag full of packets. A lot more than he needed but that could have been wishful thinking—as in, I hope we're going away for a month! (Not so much.)

It was a little moment but as with many things with Max, they’re never really little. It was yet another big step toward independence.
Ellen Seidman at 6:35 AM