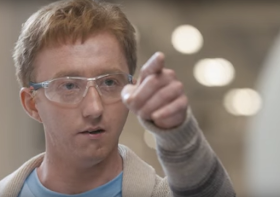 Commercials about a major company that make fun of people with disabilities: Really? That's what some people are saying.

The ads are part of a new campaign by General Electric that center around Sarah, an engineer, and her family's visit to her on the job. In the first one I saw her brother, Ricky, misinterprets what she says about how the company's machines communicate with each other. Here, watch:

The ads aired during the Olympics and are still being shown. The one below about robots, notes a piece in the L.A. Times, was watched more than any other commercial.

These ads have incensed some viewers, who believe Ricky has special needs. "It's obvious he's on the spectrum and this ad exploits such ignorant stereotypes," said one commenter over on ispot. "It really seems like GE is making fun of a young man with intellectual disabilities," noted a YouTube viewer.

Ricky may exhibit some traits typical of autism—he takes things literally, he attributes feelings to inanimate objects—but I don't think GE was purposefully mocking anyone with special needs. What's for sure, though, is that a person who thinks and acts differently is being used as comedic material. And that's such an old-school way to engage the masses.

Commercials like these do us all a disservice, because they promote intolerance—witness the parents' exasperation, the sister's forced patience with her brother. Sure, you could say it's just a commercial but it was seen by countless millions, and it's yet another dig at being different. People with disability already have many societal challenges to overcome. Commercials like these further encourage the misunderstanding that anyone not smack in the middle of the spectrum of normal is laughable.

I'm sure there are people who found these ads amusing. As the parent of a different thinker, I wasn't one of them. The commercials would have been far more compelling if Ricky turned out to be smarter than 'em all.